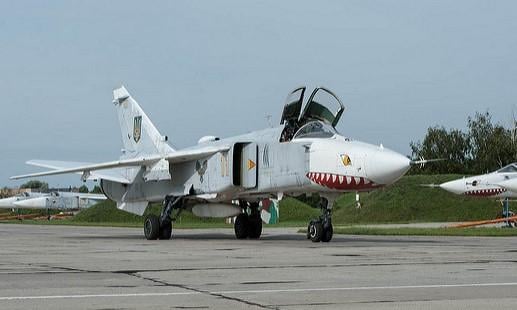 "The latest footage is really impressive. It shows what is probably a Su-24M Fencer, a supersonic, all-weather, twin-engined, two-seater plane with a variable geometry wing, designed to perform ultra low level strike missions developed in the Soviet Union and serving, among the others, with the Syrian,Iranian and Libyan Air Force buzzing the flight line at an airbase in Ukraine, probably once again "Staro" [Starokostiantyniv], where the Fencers of the 7th Tactical Aviation Brigade are based," Business Insider wrote.

"Although Ukrainian Air Force pilots regularly fly at low altitude, this time the Su-24 appears to be lower than comfortable for the camera man, missing the other Fencers on the apron by a matter of a few meters (or maybe centimeters…)," it said.

It also mentioned the most famous low-altitude passes, namely those of a MiG-29 performing a show of force on pro-Russia separatist blocking rails; a big Ilyushin Il-76 buzzing some Su-25s (and the Frogfoots returning the favor while buzzing the tower); a Su-25 flying low over the heads of a group of female soldiers posing for a photograph and then performing an aileron roll; a Su-27 Flanker performing a low pass right after take off; and a Su-24MR tactical reconnaissance aircraft flying low over the flight line at Starokostiantyniv.

If you see a spelling error on our site, select it and press Ctrl+Enter
Tags:airforceflightpilot