Business Insider: Russian Mig-31 spotted with mystery weapon that could be nightmare for U.S. military

The War Zone noticed Russian aviation photographer ShipSash snapping photos of the Mig-31 armed with a massive missile taking off from the Russian aviation industry's test center in Zhukovsky near Moscow on September 14. 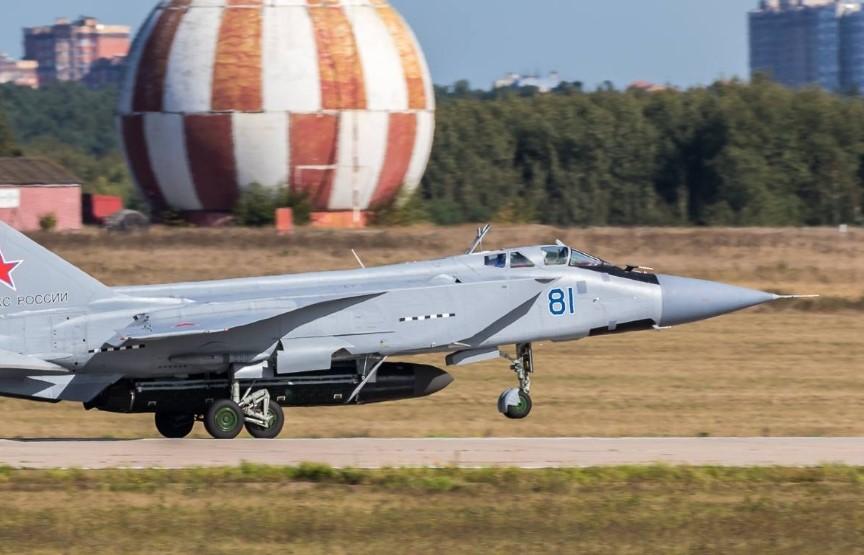 Planespotters found a Russian Mig-31 Foxhound taking off with a never-before-seen mystery weapon that could likely have an anti-satellite role, meaning it's a nightmare for the U.S. military.

The Foxhound is a 1980s Soviet fighter that remains one of the fastest and highest flying jets ever built. It's ability to push Mach 3 near the edge of space with large weapons payloads makes it an ideal platform for firing anti-satellite missiles, which Russia appears to have tested in September, Business Insider reported.

The War Zone noticed Russian aviation photographer ShipSash snapping photos of the Mig-31 armed with a massive missile taking off from the Russian aviation industry's test center in Zhukovsky near Moscow on September 14.

The Mig-31 has enjoyed somewhat of a rebirth in recent years as a platform for new Russian super weapons, like the Kinzhal hypersonic anti-surface missile that Russian President Vladimir Putin said could evade any U.S. defenses.

The Mig-31 has a history of use in anti-satellite programs, but the new missile appears to show a renewed effort in that direction.

The U.S., Russia, and China have demonstrated anti-satellite capabilities in the past, and as war increasingly relies on information shared via satellite, attacking these critical nodes increasingly makes sense.

President Donald Trump has sought to address the threat of space-based warfighting with a new military branch, the Space Force, though experts remain dubious what all such a force could accomplish in this early stage.

It's unknown if the Mig-31 spotted in September carried an anti-satellite missile or some kind of satellite launcher, though they both serve a purpose in space-based warfare. Since both sides can destroy satellites, a space-based war would likely involve the downing of old satellites and launching of new satellites at a fast pace.

But that's where space warfare meets its extreme environmental limit. Space debris orbiting the earth at many times the speed of sound could eventually threaten all existing satellites, plunging the earth back to a pre-Cold War state of relying entirely on terrestrial communications.

While many Russian and Chinese planes still have analog controls and gauges, the U.S. relies most heavily on space assets and GPS, meaning space war would be more of a nightmare for Washington than Moscow.

If you see a spelling error on our site, select it and press Ctrl+Enter
Tags:RussiaUSAweaponsmilitarymissilejet