Images captured between July 19 and October 1 indicate work on an exposed bunker under renovation that appears to conceal activity underneath. 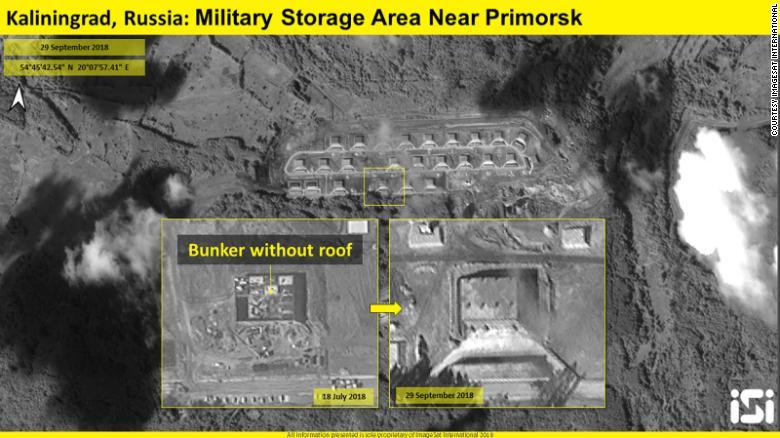 Kaliningrad – Russian territory that's sandwiched between Poland and the Baltics but disconnected from the rest of Russia, known as an exclave – has been a focal point in tensions between Russia and the West, CNN reported.

Earlier this year, aerial images came to light that suggested the Russians had significantly modernized a nuclear weapons storage bunker in Kaliningrad. Now, satellite imagery and analysis from ImageSat International, a commercial satellite firm, appear to confirm that a major modernization is underway in at least four locations throughout the region.

Those upgrades include fresh work at what analysts have identified as the Kaliningrad nuclear weapons storage site. Images captured between July 19 and October 1 indicate work on an exposed bunker under renovation that appears to conceal activity underneath.

Another set of images shows 40 new bunkers under construction, increasing capacity at a military storage area near Primorsk, Russia's second-largest port on the Baltic Sea. The new bunkers surround older, smaller bunkers at the center of the site. Images from July 18 show the bunkers under construction; 10 weeks later, the bunkers appear complete.

A short distance north of Kaliningrad, images appear to show upgrades to the Chkalovsk air base, including a new railway and the installation of an instrument landing system that would allow aircraft to land in inclement weather.

A final set of images shows the upgrades in Chernyakhovsk, a base that houses the 152nd Missile Brigade of the Russian military. In February, the base received nuclear-capable Iskander missiles, prompting a U.S. defense official to call it "the biggest move we've seen" in terms of Russian militarization of the Baltics.

The Russian military did not immediately respond to CNN's request for comment on new evidence of military modernization in Kaliningrad. But the Russian government has consistently defended its right to deploy weapons there.

Kaliningrad matters because of its strategic location.

"It's very important for them [the Russians] because that is their port on the Baltic sea," said Adm. James G. Foggo III, the commander of U.S. Naval Forces Europe-Africa and commander of the Allied Joint Force Command in Naples, Italy.

"They don't have a land bridge that extends to that area ... and so they've built it up over time."

Read alsoLithuanian president on Russia's Iskander in Kaliningrad: A threat to half of Europe

Foggo, who did not comment directly on the new images, said Russia's presence in the exclave does not deter NATO from operating in the region.

"If they want to challenge us, we will challenge them," he said. "We're not going to be intimidated by those systems that are out there."

But U.S. military officials say they are concerned by what they call Russia's ability to establish "anti-access/area denial" capabilities, or, weaponry that reduces NATO's potential freedom to maneuver in the region. Those include some of the modern weapons systems stationed in Kaliningrad, including anti-ship missiles, radar systems and surface-to-air missiles.

The ImageSat International report bolsters findings from a June 2018 Federation of American Scientists (FAS) conclusion that Russia may have significantly modernized the nuclear weapons storage site since 2016. The FAS report pointed to an underground bunker that was excavated and deepened before it was covered over again, "presumably to return (to) operational status soon.

The new ImageSat report points to upgrades at the same bunker. Hans M. Kristensen, the director of nuclear information at FAS, previously said it was unclear if nuclear weapons are or were stored at the site, but suggested the weapons could be moved there quickly in a crisis.

Kaliningrad sits about 482 kilometers (300 miles) west of mainland Russia, and as tensions between NATO and Russia have escalated, Kaliningrad has become a major fault line in relations between Russia and the West. NATO has stepped up its military presence in the Baltic region; in addition, U.S. President Donald Trump has demanded that fellow NATO members invest more in defense spending.

But Kaliningrad isn't Russia's only frontier with NATO. Russia also shares a small border with Norway, where U.S. Marines will be training later this month as part of Trident Juncture, a major NATO military exercise involving 50,000 troops, 10,000 vehicles, 150 aircraft and 65 vessels.

Trident Juncture is meant to send a message. It is a so-called Article 5 exercise that tests the readiness of NATO allies to come in to restore the sovereignty of one of its members – in this case, Norway – after an act of aggression.

Tensions between Russia and the West have been at highs not seen since the Cold War, amid the poisonings in England, allegations of Russian election meddling and Western sanctions on Moscow.

But Foggo, who is overseeing Trident Juncture, said the exercise wasn't a threat to Russia, noting that NATO and Russian troops would be more than 700 kilometers (approximately 435 miles) apart from each other during the maneuvers. NATO, he added, had invited Russian and Belarusian observers to monitor the exercise.

"I want them to be there because that conveys the strength of the alliance," Foggo said.

If you see a spelling error on our site, select it and press Ctrl+Enter
Tags:RussiaNATOBalticsKaliningrad