Officers of the Russian presidential Security Service are working under the guise of cameramen, journalists reported. 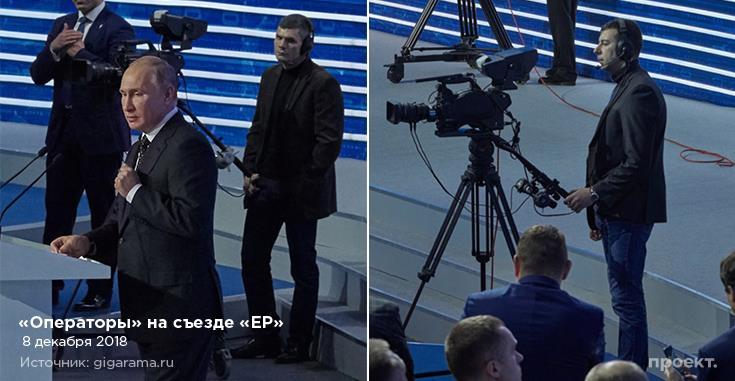 At the Congress of United Russia, Russian president Vladimir Putin's bodyguard was disguised as a cameraman and standing by his side at the stage while the president addressed the audience.

It was the journalists of the Proekt ("Project") independent media outlet who have spotted this on December 8.

"We've discovered a new way of disguise by President Vladimir Putin's guards. On Saturday's United Russia congress at Crocus Expo [International Exhibition Center], many cameramen were actually filming, while two of them drew our attention for two reasons. Firstly, they were sporting exactly the same kind of jeans, jackets and turtlenecks. Secondly, they were obviously unaware of how to handle their cameras. One of them didn't even try to pretend that he was shooting the event. He was just looking around without touching the camera," the journalists wrote on Facebook, having posted the relevant photos.

"We've found confirmation of [our suggestion]. One of Putin's guards was spotted during the president's meeting with his Egyptian counterpart [Abdel-Fattah] el-Sisi along the waterfront in Sochi on October 16," the journalists said.

As UNIAN reported earlier, an entry had been revealed in Stasi archives on Vladimir Putin issued at the time Germany deployment as a KGB operative. According to the edition, the ID of Major Putin was issued on December 31, 1985. It was extended every quarter for the next four years. The document was needed in order for Putin to visit the Stasi office unimpeded.

If you see a spelling error on our site, select it and press Ctrl+Enter
Tags:Putinsecurity