Kasparov also said that another blow to Putin has been the European sanctions imposed in response to the annexation by Moscow of Ukraine's Crimea region in 2014 and its support for Russian-led forces in eastern Ukraine. 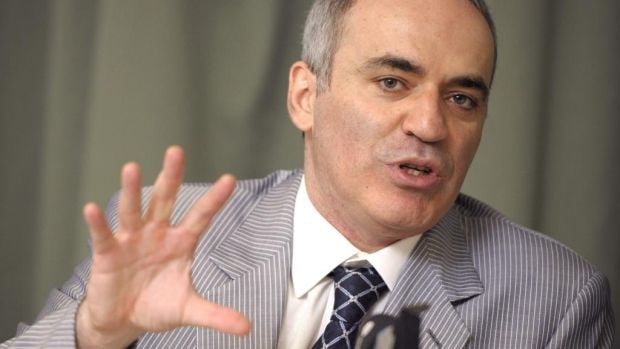 A prominent Kremlin critic says Russia has been rapidly losing its standing on the world stage due to President Vladimir Putin's "aggressive" policies.

"The main problem of the Kremlin is not connected to the ability or inability to control the processes inside the country, but the fact that the regime began to rapidly lose its international standing," said Garry Kasparov, a former world chess champion turned opposition activist, Radio Free Europe / Radio Liberty (RFE/RL) reported.

"Sooner or later it had to happen, because this aggressive policy of the Kremlin, it had to convince the free world that it was pointless to negotiate with Putin," Kasparov told RFE/RL's Russian Service in an interview on December 14.

Echoing allegations in the United States, Kasparov accused the Kremlin of meddling in other countries' affairs, including the 2016 U.S. presidential election.

However, the "triumph" in Moscow has been short-lived because, "as it turned out, the president of the United States, with all his enormous political power, is limited in his ability to pursue the policy that Putin would have expected from him," Kasparov added.

The allegations of Russian election meddling have dogged Trump's presidency and have given rise to an investigation by Special Counsel Robert Mueller into potential collusion between Moscow and the Trump campaign. Trump denies the allegation, calling it a political witch hunt.

Kasparov also said that another blow to Putin has been the European sanctions imposed in response to the annexation by Moscow of Ukraine's Crimea region in 2014 and its support for separatists in eastern Ukraine in a conflict that has killed more than 10,300 over the past 4 1/2 years.

On December 13, the European Union prolonged the sanctions for another six months.

The sanctions, which mainly target the Russian banking and energy sectors, were first imposed in the summer of 2014 and have been extended every six months since then.

However, Kasparov pointed out that Putin's policy of trying to "create division in the Western world" is "far from over."

If you see a spelling error on our site, select it and press Ctrl+Enter
Tags:RussiaKasparov