Mass protests in Belgrade began on December 8 after an opposition figure was brutally assaulted in the country's south on November 23. 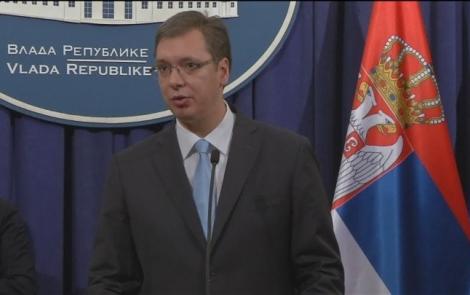 Addressing the rally, former Supreme Court Judge Zoran Ivosevic said that Vucic must file for resignation so that Serbia could become a legal state again, according to Deutsche Welle.

Also, Ivosevic accused the president of violating the principle of balance of powers.

The protesters marched through the center of Belgrade toward the government headquarters and that of the pro-government state television channel RTS.

Mass protests in Belgrade began on December 8 after a group of people wearing black shirts brutally assaulted opposition's Left Party leader Borko Stefanovic of November in the city of Krusevac in the country's south. The politician was beaten with an iron bar and left severely injured.

Suspects in the attack were soon detained, but then released shortly before Christmas due to lack of evidence.

Vucic condemned the incident, but the opposition says it is hos rhetoric and defamation of critics and opposition figures that has created a climate of intolerance across the country.

They also claim that the Serbia's ruling Progressive Party was behind the  beating.

If you see a spelling error on our site, select it and press Ctrl+Enter
Tags:protestsSerbiaVucicrallyBelgrade