Kerry: Violation of Minsk agreement by Russia will harm its economy 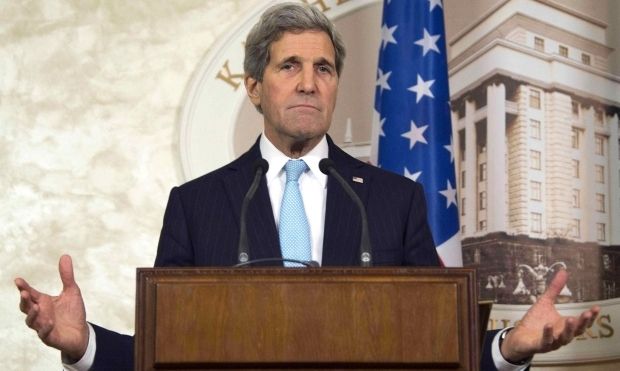 "[At the meeting], I stressed the importance of Russia and separatist leaders complying with the conditions of the Minsk agreement, including in Debaltseve and Mariupol,” Kerry said.

“If it does not occur, if they are applied only partially, and if the OSCE is not given complete freedom of actions, it will inevitably have further consequences for Russia’s already weakened economy."

As UNIAN reported earlier on February 12 there were held talks in Minsk on the settlement of the crisis in the Donbas with the participation of President of Ukraine Petro Poroshenko, French President Francois Hollande, German Chancellor Angela Merkel and Russian President Vladimir Putin.

Following the talks, the parties approved a package of measures aimed at implementing the September Minsk arrangements. In addition, the leaders adopted a declaration of Ukraine, France, Germany and the Russian Federation in support of these measures.

On February 15 at 0001, a ceasefire was supposed to come into effect, but the militants violated it within 40 minutes and went on to attack the government-held town of Debaltseve. Ukrainian troops retreated from the town under fire on February 18.

On February 22, Kerry said the United States and the European Union were "seriously discussing" the feasibility of introducing new sanctions against Russia in connection with the situation in Ukraine.

On February 26, the Armed Forces of Ukraine said it had begun withdrawing military equipment back from the demarcation line in the conflict area, while saying the militants had moved only part of their equipment, and were only pretending to carry out a withdrawal.