Russian President Vladimir Putin met Kyrgyz President Almazbek Atambayev at the Constantine Palace in St. Petersburg on Monday, making his first public appearance since March 5 and dispelling rumors that something was amiss in the Kremlin's halls of power. 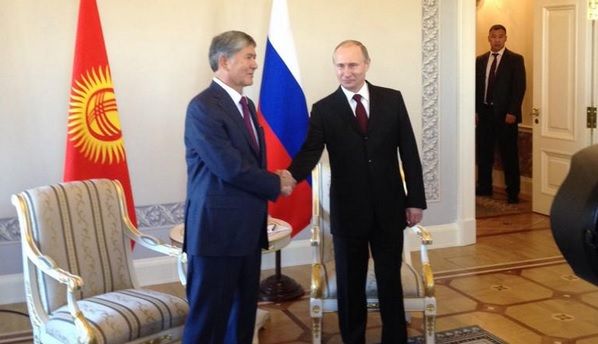 The meeting between the two presidents comes amid recent speculation in the media that the Russian leader was seriously ill or even dead, or that he had been overthrown in a military coup.

The Kremlin denied all the rumors, but at the same time added fuel to the fires of speculation by releasing photographs and video of Putin that appeared to have been taken before his disappearance, or that were impossible to date.

But the excitement appeared to be over on Monday, with the Kremlin press service reporting dryly that "the agenda of the summit talks will include a discussion of key issues of further strengthening of Russian-Kyrgyz cooperation, first of all - in the trade, investment, cultural and humanitarian spheres, as well as in the energy sector" – standard wording for a meeting between Putin and the leader of a former Soviet republic.

At the talks, a thorough exchange of views on cooperation in the context of Kyrgyzstan’s accession to the Eurasian Economic Union is planned, the Kremlin said.

Speaking of his absence, Putin said things "would be boring without rumors."