Bildt: We warned about Putin's plans, but Brussels was asleep 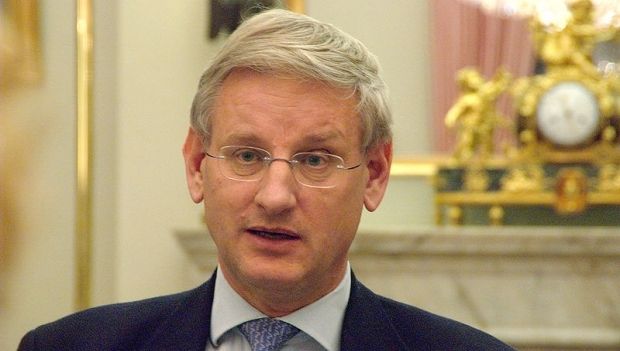 "I think we should have reacted more strongly towards Russia when they started to misbehave in the summer of 2013," Sikorski said.

"Clearly, when they started the sanctions against Ukraine, we didn't see clearly the implications of that, and I remember that [former Polish Foreign Minister] Radek [Sikorski] and myself were trying to alert Brussels, and Brussels was more or less asleep. Would that have made a difference? I don't know. But that was clearly a mistake," Bildt said.

According to Sikorski, in the near future Vladimir Putin intends to turn the occupied territories into enclaves.

"I think at the moment [Putin] is keen to build up the enclaves - these "people's republics" virtually without people, by the way, but nevertheless - strengthen them militarily,” Sikorski said.

“I think he would like them to be able to undertake military operations more on their own, because he knows the political price associated with him sending in regular Russian Army time after time is too high. He is waiting to exploit weaknesses either in Ukraine or in the West. He believes that he has time on his side and that the West will get bored with the entire thing.

"I think the most important thing is what was done by the European Council [on March 19-20] - that is, essentially, to say the sanctions [against Russia] are going to be in place all this year. It has not been legally said like that, but politically that was the decision that was taken. I think that is a very good signal. Then I think we should shift focus to strengthen Ukraine in different ways. I think that the IMF program was very important. I think it is important that other countries are coming [forth] on top of that - Sweden did, the U.S. is doing [it], but other European countries should be doing that as well.

“And then [we should] make certain that we truly help them with all the reforms necessary, because Ukraine is going to go through a tough time and they need our solidarity, sympathy, and support. These things, I think, are the priorities."

As reported earlier, the EU member countries have extended economic sanctions against Russia until the end of 2015.