A cat filter on a live stream of Shaukat Yousafzai on Facebook gave him ears and whiskers. 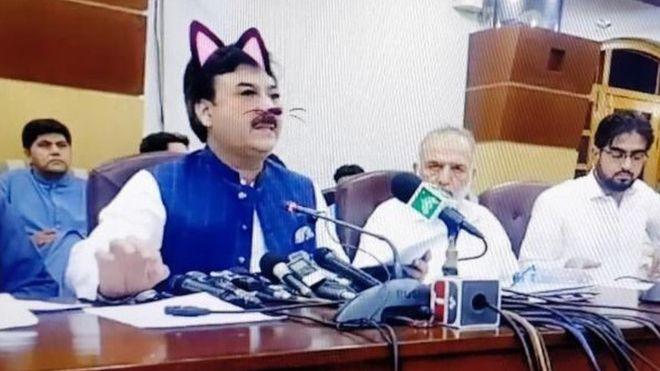 A Pakistani politician's live-streamed press conference descended into farce when a cat filter was switched on by mistake.

Shaukat Yousafzai was briefing journalists last Friday when the setting was accidentally turned on, the BBC reported.

Facebook users watching the video live commented on the gaffe, but Mr Yousafzai carried on unaware of his feline features.

He later said it was a "mistake" that should not be taken "so seriously".

As Mr Yousafzai spoke, the comical filter superimposed pink ears and whiskers on his face, and that of other officials sitting beside him.

The video, posted to the official Facebook page of the Pakistan Tehreek-e-Insaf (PTI) party, was deleted minutes after the press conference.

The blunder was blamed on "human error" by the party, which runs the Khyber Pakhtunkhwa province in north-west Pakistan.

"All necessary actions have been taken to avoid such incidents in future," it said.

Unfortunately for Mr Yousafzai, the cat was already out of the bag.

Screen grabs of the live stream have been shared widely on social media, much to the humiliation of Mr Yousafzai and his colleagues.

Another asked: "Who let the cats out?"

"I propose all parliamentary proceedings around the world to be recorded with Cat Filters. Please start with the British Parliament!," a third joked.

If you see a spelling error on our site, select it and press Ctrl+Enter
Tags:PakistanFacebook