The man who walked his daughter down the aisle is Major General Andrei Averyanov, the secretive commander of a Russian military unit that Western intelligence officials have reportedly linked to a range of malfeasance in Europe. 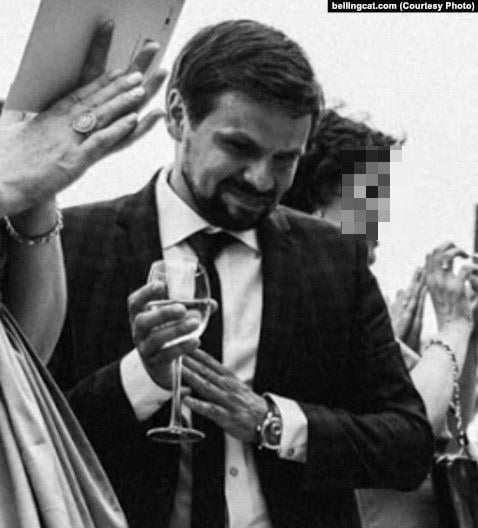 The man who was publicly identified by British police as one of two Russian military intelligence officers who allegedly planted a highly toxic nerve agent called novichok at a house in Salisbury, England, in a bid to poison a Russian double agent Sergei Skripal, was spotted at pictures made at a Russian wedding held less than a year prior to the poisoning.

The presence of the poisoning suspect, Anatoly Chepiga, at the wedding that took place on the shores of Lake Senezh 50 kilometers north of Moscow adds to the already substantial body of evidence linking him to Russian military intelligence, commonly known as the GRU, a joint investigation by RFE/RL and the open-source research group Bellingcat has found.

It also further undermines his widely mocked claim that he is simply a nutritional-supplements salesman named Ruslan Boshirov who traveled to Salisbury in March 2018 to admire its architecture.

The man who walked his daughter down the aisle is Major General Andrei Averyanov, the secretive commander of a Russian military unit that Western intelligence officials have reportedly linked to a range of malfeasance in Europe.

Chepiga's attendance at the nuptials was first reported in an October 8 article in The New York Times. The report cited unidentified European intelligence officials as assessing that Averyanov's unit, 29155, was involved in a series of high-profile incidents across the continent, including the Skripal poisoning, the attempted poisoning of a Bulgarian arms dealer in 2015, and a failed coup attempt in Montenegro in 2016.

But while the Times report included a cropped image of Averyanov that it said was taken at his daughter's 2017 wedding, the newspaper did not publish an image of Chepiga at the event.

An investigation into Averyanov's family tree led to social media posts and other online resources that RFE/RL and Bellingcat scoured to determine the time and location of the wedding at Lake Senezh.

Videos shared on Instagram by guests provided fleeting glimpses of Chepiga at the event, including one in which Chepiga's blurred face can be seen among the guests as Averyanov walks his daughter to the altar.

Chepiga can also be seen briefly in another video posted to YouTube, including by an account whose user name matches that of Averyanov's son-in-law.

But the clearest visual evidence of Chepiga's presence comes from photographs posted on two wedding-themed websites.

The seating arrangement for the wedding of Averyanov's daughter also includes the name Aleksandr Petrov -- the pseudonym Mishkin used when he traveled to Salisbury at the time of the Skripal poisonings.

Bellingcat and RFE/RL could not determine, however, whether Mishkin was also in attendance. Open-source photographs and video of the event do not show a man resembling Mishkin.

There is little public information about the activities of Unit 29155, though a 2018 investigation by RFE/RL found Defense Ministry orders from 2012 that awarded merit bonuses to its members of one of its subunits for "special achievements during the course of service."

Public records list Averyanov as the head of Unit 29155, which is wholly controlled by the Russian Defense Ministry. But like many Russian intelligence officers, GRU or otherwise, his public activities are not well documented.

The Kremlin dismissed the Times report about Unit 29155's alleged connection to the Skripal poisoning and other incidents in Europe as "pulp fiction."