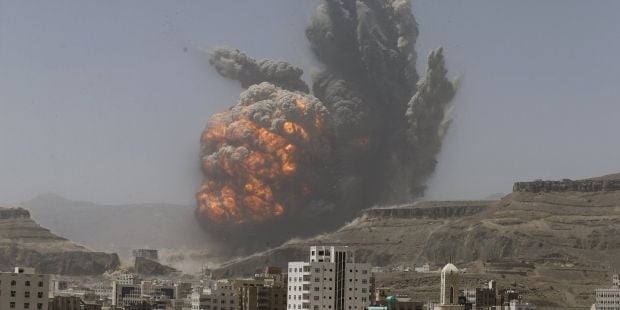 They say the strikes targeted Houthi rebel positions in the southern port of Aden after the five-day humanitarian truce expired at 2000 GMT.

In Saudi Arabia, Yemeni political parties earlier began negotiations on how to resolve the crisis.

But Shia rebels stayed away from the talks in the capital Riyadh.

Opening the meeting, the UN envoy to Yemen, Ismail Ould Cheikh Ahmed, said: "I call on all parties to renew their commitment to this truce for five more days at least."

He also urged them "to refrain from any action that disturbs the peace of airports, main areas and the infrastructure of transport".

The Saudi-led coalition has carried out air strikes since March against the Iran-backed Houthis and allied military units loyal to former President Ali Abdullah Saleh.

There are currently 12 million people without access to sufficient food, clean water, fuel or basic medical care, according to the UN. As many as 300,000 have fled their homes.