A play on words about Putin and an expensive make of Swiss watch, Hublot, which sounds like an obscenity in Russian, has been edited. 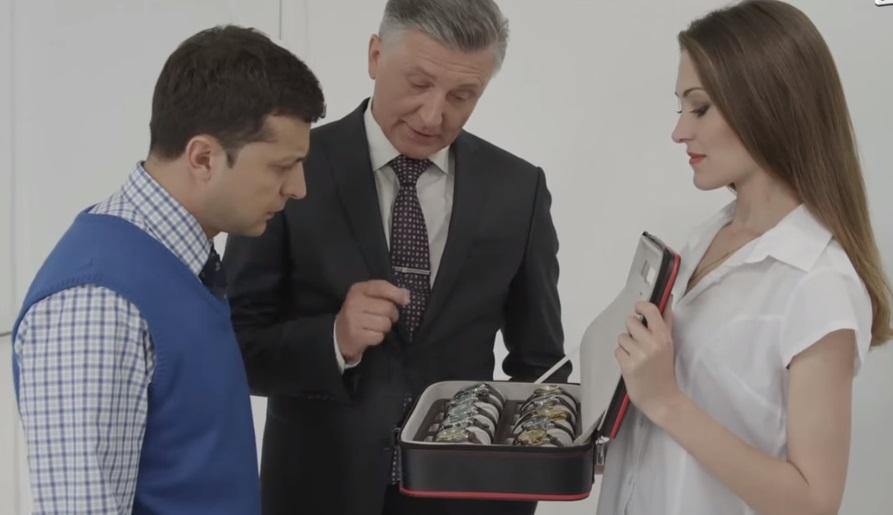 Screenshot from the sitcom: Holoborodko is looking at an expensive make of Swiss watch, Hublot

A Russian television channel has abruptly stopped airing the sitcom that launched the political career of Ukraine's president, after viewers noticed it had edited out an obscene joke about Vladimir Putin from the first episode.

The TNT channel, part of the media arm of Gazprom, raised eyebrows when it announced it would air "Servant of the People," whose star Volodymyr Zelensky, playing schoolteacher Vasyl Holoborodko, who becomes president, went on to win Ukraine's presidency in real life this year, Reuters said.

TNT began airing the series on Wednesday, but the Russian-language service of the BBC noted it had edited out a play on words about Putin and an expensive make of Swiss watch, Hublot, which sounds like an obscenity in Russian.

TNT had been scheduled to continue airing the show on Thursday and Friday, but those listings have been replaced, the Vedomosti business daily reported. Listings now show it will run a hospital sitcom and a Russian comedy series.

TNT did not respond to a request to comment about the alleged censorship, Reuters said. It denied it had ever planned to continue running the show and said it had only begun doing so for the first few episodes as part of a marketing ploy for a pay-to-view platform where it said the series would still be available.

Putin and Zelensky met for the first time this week at a summit in Paris aimed at finding ways to end the war in Donbas, eastern Ukraine.

If you see a spelling error on our site, select it and press Ctrl+Enter
Tags:PutintelevisionmovieZelenskysitcom