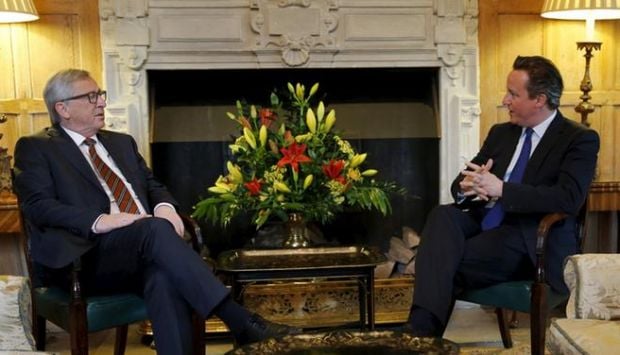 The UK's leading manufacturing association wants Cameron to move up a referendum on the UK’s membership of the union, German news broadcaster Deutsche Welle reported on Tuesday.

Cameron and Juncker met Monday at the UK prime minister's residence to renegotiate the terms of Britain's EU membership.

The UK’s Conservative PM has called for the bloc to change its policies on immigration, welfare eligibility and the power to refuse further integration - at least where this specifically affects Britain.

"The prime minister underlined that the British people are not happy with the status quo and believe that the EU needs to change in order to better address their concerns," Cameron's office announced.

Cameron's Tories won a majority in general elections May 7. Wooing voters from Britain's euroskeptic right en route to his second term, Cameron promised an in-out referendum on membership in the European Union by 2017.

Earlier on Monday, Cameron announced that citizens of most EU countries residing in Britain would not get to vote in the referendum. Snipping 1.5 million people in total from the rolls, Cameron's plan would limit the polls to voters currently eligible for general elections: citizens over 18 and UK residents from Ireland or the Commonwealth, which includes nationals of Malta and Cyprus, both of which are EU members. Commonwealth citizens in Gibraltar and British nationals who have lived abroad for less than 15 years can also vote.