A video was posted showing the parade rehearsal in Moscow where nearly 15,000 Russian troops are seen standing in close ranks without any protective gear. 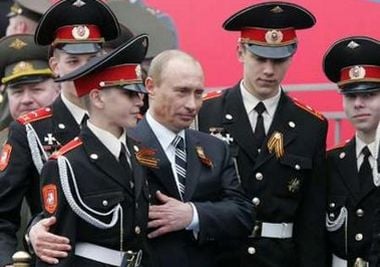 Russian President Vladimir Putin's Press Secretary Dmitry Peskov says no decision has been made yet to postpone this year's Victory Day Parade on Moscow's Red Square May 9 amid the coronavirus pandemic.

"No other decisions have been made, the situation is being monitored," he said, answering the question on whether the possibility of postponing the parade in the country's capital against the backdrop of the coronavirus pandemic was being discussed, as reported by an UNIAN correspondent in Russia.

At the same time, a Ukrainian OSINT Group Information Resistance posted a video, apparently showing the parade rehearsal where nearly 15,000 Russian troops are seen standing in close ranks without any protective gear, while a narrator who is shooting a video is mocking the authorities for imposing a limit on gatherings to 50 people and at the same time demonstrating full disregard for the safety of troops.

Russia reported 440 new cases of COVID-19 over the past day.

However, as reported earlier, concerns were raised about the plausibility of Russian government stats.