The Islamic State group has published photographs of militants destroying what it says are artefacts looted from the ancient ruins of Palmyra in Syria, BBC reported on Thursday. 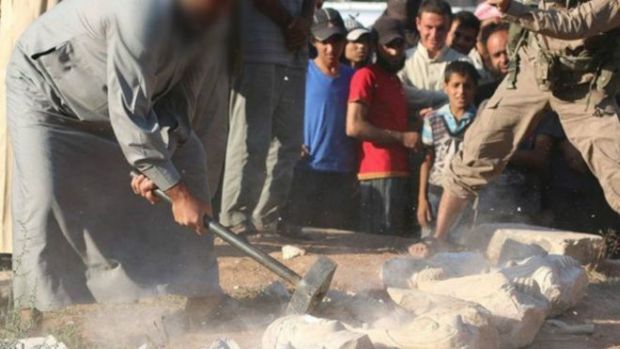 Six statues are shown being hit with sledgehammers while a crowd looks on.

The jihadist group said the statues had been seized from a smuggler, who was pictured being whipped as a punishment, BBC said.

Meanwhile, the UN's cultural agency has said antiquities plundered by IS from sites in Iraq and Syria have ended up with collectors in the UK.

Syria's antiquities director Maamoun Abdelkarim said on Thursday the IS group had destroyed a 2,000-year-old statue of a lion from the Palmyra ruins.

Abdelkarim called the destruction of the three-meter (10ft) statue, known as the Lion of al-Lat, "the most serious crime [IS has] committed against Palmyra's heritage."

The group overran Palmyra at the end of May, sparking fears that it might demolish the UNESCO World Heritage site as it has done with ancient sites in Iraq.Some 60% of the Old City of the northern Syrian city of Aleppo has been destroyed in fighting between government forces, rebels and IS fighters, while 20% of Iraq's 10,000 archaeological sites now under the control of the IS group.

Last month, Syrian activists reported that IS fighters had planted landmines and explosives around the ruins, but it was not clear whether they intended to destroy or secure them. Palmyra's museum was also reported to have been closed by the group and guards placed outside.

But a week later, IS militants published photographs of what they said was the destruction of two Islamic shrines near Palmyra, which they described as "manifestations of polytheism".