Hundreds of migrants are in a standoff with police for a second night outside a Budapest railway station, BBC News reports. 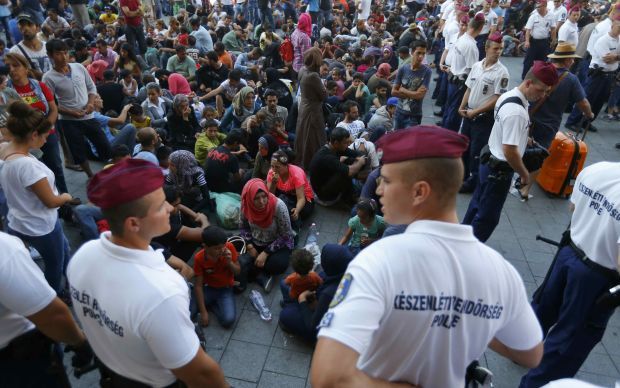 Earlier, scuffles broke out between the two sides as frustration among migrants boiled over outside Keleti station in Budapest as EU's member states are struggling to agree a common policy for dealing with the migration crisis, BBC News has reported.

Many of the migrants have tickets and are insisting they be allowed to travel on to Germany and other countries, but Hungary says it is enforcing EU rules.

Meanwhile, Germany, Italy and France have called for "fair distribution" of refugees throughout the EU.

In a joint declaration, the countries' foreign ministers also called for Europe's asylum laws to be revised, the Italian foreign ministry said in a statement.

Read alsoHungary erects anti-refugee fence on Serbian borderItaly and Greece have complained that they are overwhelmed by the numbers arriving on their shores. And while countries such as Germany are prepared to accept large numbers of asylum seekers, others, such as the UK, are not.

The BBC's Chris Morris in Brussels says the European Commission, the executive of the EU, is trying to draw up a list of safe countries of origin that failed asylum applicants can be sent back to.

Read also71 migrants found dead in truck in AustriaAnd an EC spokeswoman has now said it is preparing proposals for a mechanism to automatically redistribute a proportion of those seeking asylum among EU states.