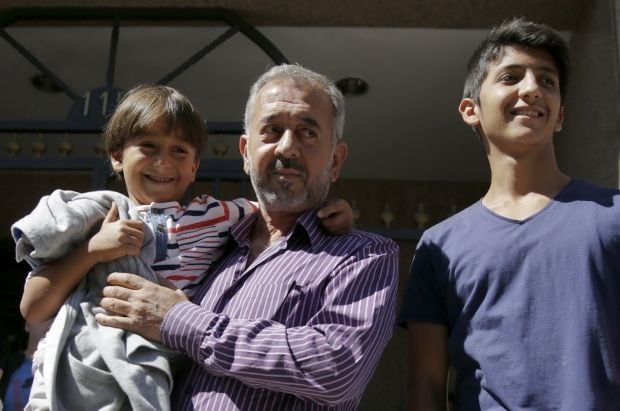 The image of Osama Abdul Mohsen shows the Syrian refugee being kicked and tripped over by a Hungarian camerawoman while running across the border from Hungary to Serbia along with his eight-year-old son. The image went viral and sparked international uproar.

The international community reacted with outrage and came all out in support of Mohsen. The camerawoman has been fired, while Mohsen has been invited to live in Spain by a football academy, where he has also been offered a job. Even Cristiano Ronaldo and Real Madrid met with the family during a match, the report says.

It has, however, now emerged that the first division football coach was not only a member of the radical al-Nusra front, but he also fought the Kurds, the Democratic Union Party (PYD) -- pro-Kurdish political unit based in Northern Syria -- alleged.

PYD, which released an official statement on the issue, alleged that Mohsen was also involved in a violent suppression during a riot in Qamishlo, following a football match, in which more than 50 Kurds were killed, in 2004.

Mohsen, who was the coach of al-Fatwa club in Deir Ez Zor between 2004 and 2010, instigated the violence after the football match between al-Fatwa and Qamishlo's Jihad club, Rudaw reported citing PYD.

The screenshots taken from Mohsen's Facebook page are proof that he is not only a member of the Nusra front, but has also fought the Kurds near Amudeh, Serekaniye and Afrin, according to the PYD's statement.