France announces three conditions for cooperation with Russia in Syria

French President Francois Hollande and his Russian counterpart Vladimir Putin on Friday discussed the three conditions required by France for cooperation with Russia in Syria, an aide to Hollande said, according to Reuters. 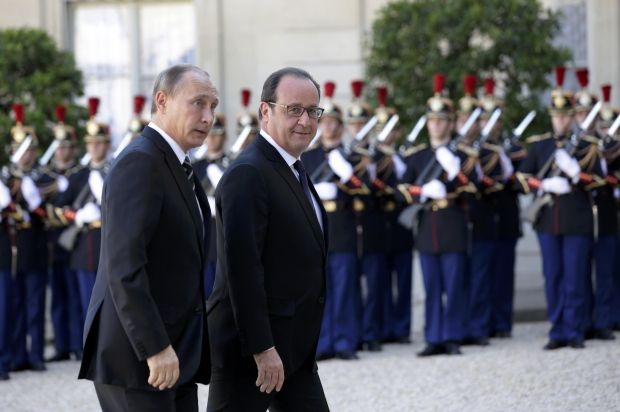 "Those are: attack ISIS and Al Qaeda and no other targets, ensure the safety of civilians, and put in place a political transition that will see the departure of Russia's ally Syrian President Bashar Al-Assad," Reuters wrote.

Both Hollande and Putin looked stern and frosty-faced as the French leader welcomed his Russian counterpart in the yard of the Elysee palace, exchanging a couple of terse handshakes in front of photographers and cameramen, Reuters said.

Russia bombed Syria for a third day on Friday, mainly hitting areas held by rival insurgent groups rather than the Islamic State fighters it said it was targeting, according to UK-based Syrian Observatory for Human Rights.