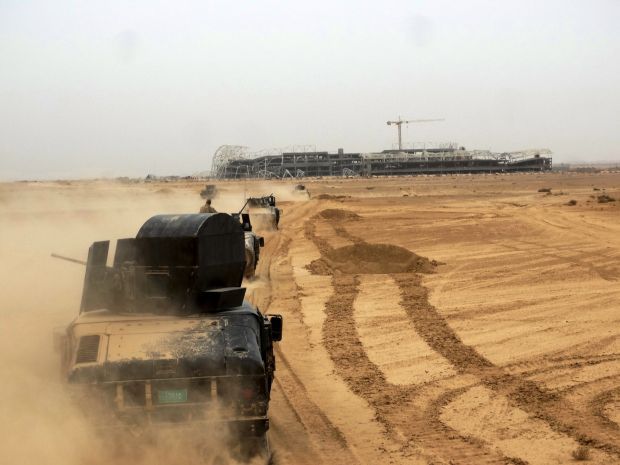 A senior Iraqi security official told NBC News that Iraqi forces began advancing toward the city — a key battleground in Anbar province in the western part of the country — about midnight Tuesday to take advantage of an impending sandstorm.

A U.S. defense official agreed that the Iraqi forces had made some rare gains, telling NBC News Wednesday that they had retaken several kilometers of Ramadi, including the University of Anbar, a frequent and bloody battleground.

The fall of Ramadi in May was considered a humiliating loss for the Iraqi military, prompting U.S. Defense Secretary Ashton Carter to accuse the Iraqis of lacking the will to fight.

Iraqi Prime Minister Haider al-Abadi said immediately after ISIS took Ramadi in May that it would be only a matter of days before the city was liberated. But criticism grew as the battle dragged on for months.

"Ramadi has been a difficult fight," acknowledged Col. Steve Warren, a Pentagon spokesman in Baghdad, describing what he called an "operational pause" forced by extreme weather, the arrival of Muslim holidays and ISIS' unorthodox tactics.

The United States and its allies trained Iraqi forces to fight a counterinsurgency, Warren said, but ISIS has "defended Ramadi almost in an early 20th-century style, with belts of defenses," a more conventional tactic than Iraq and the U.S.-led coalition had anticipated.

That meant preparations stalled while the coalition retooled how it trained Iraqi forces, he said.

With the summer and the holiday season ending, "we believe that this will all come together, and hopefully we'll see the Iraqis move forward," Warren said last week.