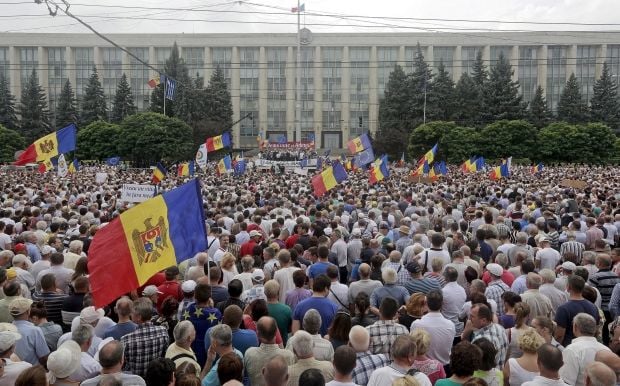 "The riots in Chisinau are the doing of Russian intelligence services, and the leader of the Party of Socialists Ihor Dodon, as well as the leader of Our Party Renato Usaty, received support from the Kremlin," Chisinau's mayor said. He called other protests useful and appropriate, and expressed his gratitude to the DA (Demnitate si Adevar, literally Dignity and Truth) civic platform for holding the demonstrations.

On October 5, Chisinau's mayor pointed out a big difference between the protests of various political forces. He stressed that the DA platform activists are advocating the European path, while supporters of the Party of Communists and Our Party are trying "keep our country subordinated to Moscow and the Kremlin."

Read alsoPro-Russian parties lead latest Moldova anti-government protestsAs UNIAN reported earlier, mass protests in Chisinau began on September 6. The DA activists have been calling for the fight against corruption, the judiciary reform, as well as European integration. They accuse the current government of only imitating the reform process and serving the interests of oligarchs.

On Sunday, another mass rally of the DA activists was held, with the protesters picketing the office of a well-known businessman, Vice-President of the Democratic Party, Vladimir Plahotniuc, who was branded the "main country's oligarch." The center-left opposition also started its rallies in Moldova on September 27. They have been advocating strengthening Moldova's statehood and close cooperation with Russia.

Read alsoAnti-government rally held in Moldova capitalBoth protest movements have put forward an ultimatum to the authorities, demanding the resignation of the president and the government, dissolution of the parliament and holding of national elections of the head of state. In the center of Chisinau the center-left activists and the activists of DA platform set up a tent camp in which protesters remain on duty around the clock.