Philippine authorities have warned of the risk of further flooding, as Tropical Storm Koppu continues to churn across the country, the BBC has reported. 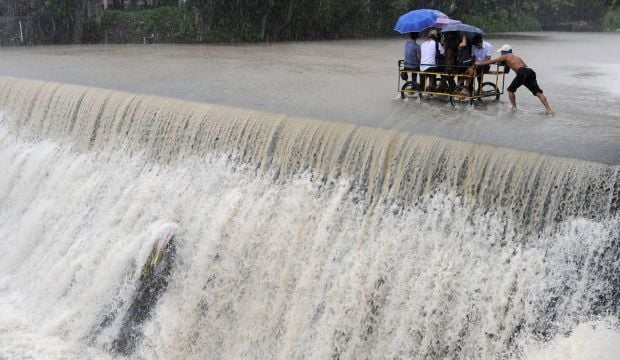 Koppu weakened from a typhoon on Monday as it reached Ilocos Norte province, on the north-western tip of Luzon, but is still bringing torrential rain across region, the report says.

One of the worst-hit areas was Nueva Ecija province, north of Manila, where a state of calamity has been declared.

The storm - known locally as Lando - did not hit there directly, but villages were inundated by water pouring off nearby mountains, trapping many people on the roofs of their homes.

Thousands of troops, police and volunteers have been mobilized to help with rescue and relief efforts.

President Benigno Aquino has visited Nueva Ecija and helped distribute emergency supplies in a shelter for those forced from their homes.

Residents of villages further downstream have been warned not to return to their homes.

"They think it is safe already to go back to their communities but we are preventing them right now," Aquino said.

The national disaster agency says 12 people are confirmed to have been killed by flooding, landslides, or falling objects. Seven people also died when a passenger boat capsized in a different storm further south in the country.

While the Philippines is no stranger to typhoons and tropical storms, Koppu has been particularly slow moving - trapped by Typhoon Champi, just east of Koppu - allowing it to dump rain for days longer than usual, making flooding especially severe.

It is the second strongest storm to hit the archipelago this year, and the 12th so far this year.

In 2013, Typhoon Haiyan tore through the Philippines causing major destruction and leaving more than 7,300 people dead or missing.