Russian air strikes in Syria are costing Moscow up to $4 million per day, data collated for The Moscow Times by a defense think tank IHS Jane's showed. 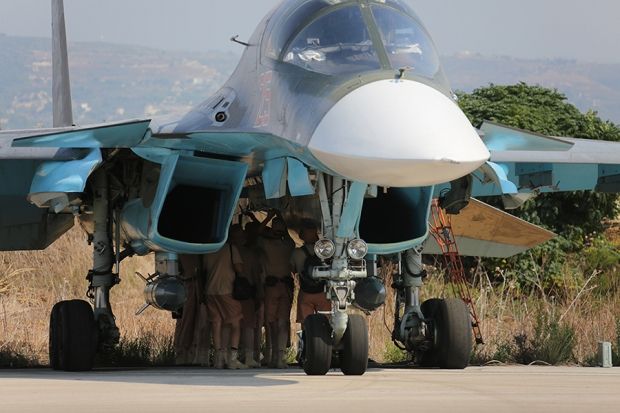 The figures show that bombing raids, supply runs, infrastructure and ground personnel — along with a salvo of cruise missiles fired into the conflict zone — have cost Russia $80 million-$115 million since strikes began on September 30, The Moscow Times reported.

Compared to Russia's RUR 3.1 trillion ($50 billion) defense budget this year, that is small change. But the Kremlin could see its costs and commitments grow. Analysts warn that the conflict in Syria could drag on for years, and if soldiers die, Russian involvement could dramatically escalate.

Each warplane costs $12,000 per hour to fly, and each helicopter $3,000 per hour, according to IHS. With the tempo of bombing runs keeping the planes in the sky for 90 minutes a day on average and choppers flying one hour per day, Moscow is spending around $710,000 every 24 hours, IHS said. Each day, they drop around $750,000 worth of munitions.

Read alsoAssad visits Putin to thank for air strikesThe military personnel cost around $440,000 per day to support, IHS estimates. Keeping the ships in the Mediterranean requires a further $200,000. Other supporting costs, such as logistics, intelligence gathering, Communications and engineering, add $250,000 per day.

That means the minimum cost of keeping this operation going is $2.4 million per day. Those price estimations are conservative, said Ben Moores, a senior analyst at IHS, and the real cost could be close to twice as high.

Read alsoBodies of 26 Russian marines killed in Syria brought back to Sevastopol: Ukrainian IntelligenceRussia’s Ministry of Defense abstained from commenting on the cost of its operations in Syria.