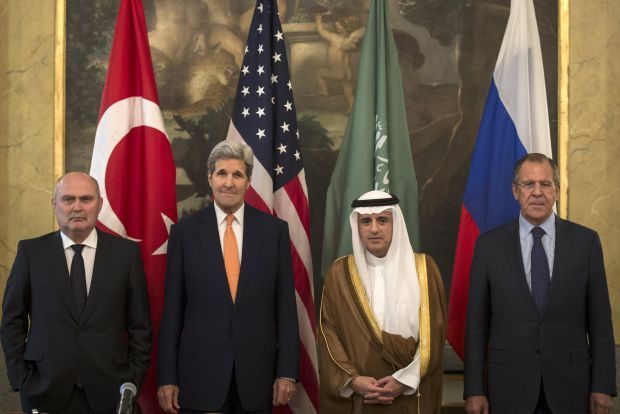 "Our common position is that we need to boost efforts for the political process in the Syrian settlement," Russian Foreign Minister Sergei Lavrov said during a meeting with his counterparts from Saudi Arabia, Turkey and the U.S. in Vienna on Friday.

"This foresees the start of full-scale talks between representatives of the Syrian government and the full spectrum of the Syrian opposition, both domestic and external - with the support of outside players," Lavrov said, according to the BBC.

Lavrov did not define exactly which opposition groups should be included.

U.S. Secretary of State John Kerry, who also attended, said the talks had been "constructive" and that an expanded round of negotiations could take place next week.

The U.S., Turkey and Saudi Arabia all support rebel groups fighting the Syrian government. Russia backs President Assad and hosted him on Tuesday in a visit criticized by the U.S.

Russia has been bombing targets in Syria since last month. It says it is primarily hitting IS, but Western powers say most of the air strikes have hit rebel groups, including those backed by the West and Gulf states.