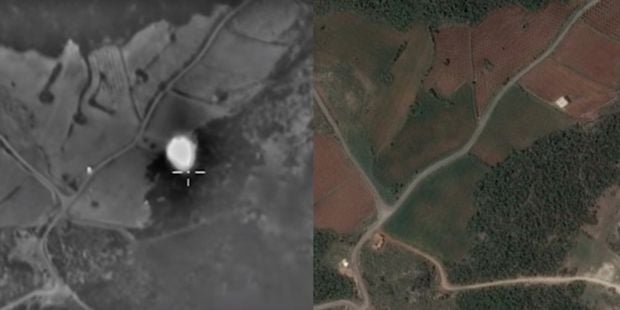 For each of the videos Bellingcat sought to answer the following questions: Did the Russian airstrike target the location it claims it did? And is there any proven ISIS presence in the bombed area? / bellingcat.com

Bellingcat's research team has geolocated, verified, and visualized each airstrike published by the Russian MoD on its official YouTube channel as of October 25.

“The outcome of our work is unequivocal: the overwhelming majority of Russian airstrikes have targeted positions held by non-ISIS rebel groups posing a more immediate threat to the Syrian regime and its head, Bashar al-Assad. In contrast, ISIS strongholds have rarely been attacked.

“For each video, a series of details are collected and verified; these are: the claimed location; the claimed target; the presence of ISIS in the area; the claimed date of the strike; and the date of upload. The exact upload time was determined using Amnesty International’s YouTube DataViewer,” Bellingcat explained.

From these details and crowdsourced geolocation efforts, the actual target of the strike was established and an error was defined. The latter describes either a mismatch between the claimed and the actual location of the attack or the absence/presence of ISIS in the bombed area or mention of ISIS in title/description of the video.

The investigation shows that:

- In all cases except one where the claimed location was the actual location, ISIS presence in that area was not identified.

- In the cases where the claimed location mismatched the actual location, no ISIS presence exists in the area that was targeted.

- The claimed targets carry varying labels: most often, the MoD names them “ISIS,” but “terrorists” or “militants” frequently occur as well.

- From 12 October onward (date of video upload), the targets in the description have changed: “ISIS” has been replaced by “terrorists” and “militants.” 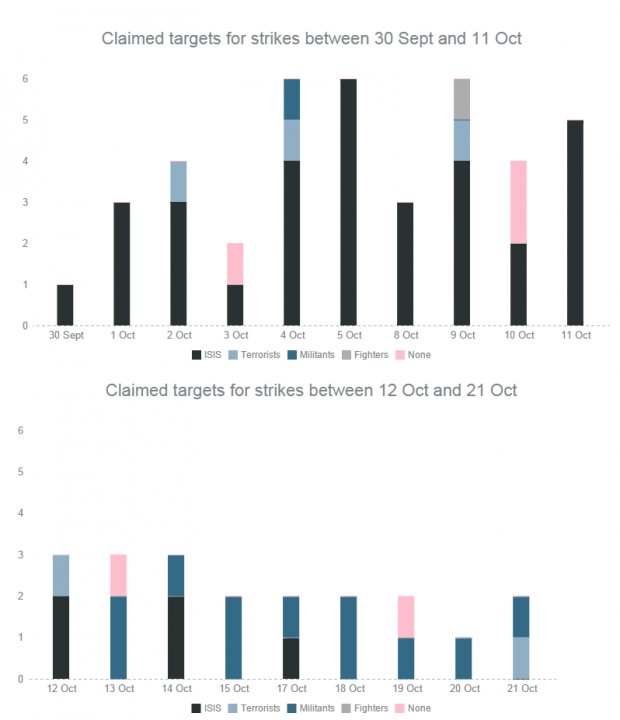 Available data provided for two observations. “The first one is that, for the period 30 September – 11 October, a higher number of videos were released compared to the period 12 October – 21 October. The second observation is that gaps in the video releases exist. This is the reason why the some days are not specified in the above charts.

“The initial airstrike videos presented a narrative where the target was ISIS; this appears to have evolved in the past two weeks which saw videos being released as targeting unspecified ‘militants’,” reads the report.

“A substantial proportion of the strikes appears to have targeted locations in Hama, Idlib and Latakia governorates where ISIS has no presence. These two provinces are controlled by various opposition forces fighting against al-Assad’s regime,” the experts said. 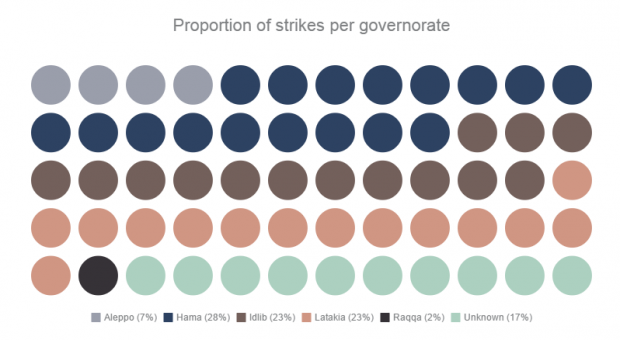 Bellingcat’s investigation highlights that the overwhelming majority of locations hit by Russian airstrikes is outside of areas known to be under ISIS control.

“Russian officials themselves have provided clear proof regarding the actual targets. A detailed and richly illustrated map circulated in the RuNet indicates that the majority of Russian airstrikes have targeted Idlib and Hama governorates, labeled by the MoD as “areas controlled by other [i.e., non-ISIS] illegal armed groups.”

As UNIAN reported earlier, Russia has been carrying out airstrikes in Syria since September 30, claiming that the Russian Air Force targets Islamic State.

According to media reports, air strikes are accompanied by a ground offensive of Bashar al-Assads forces.