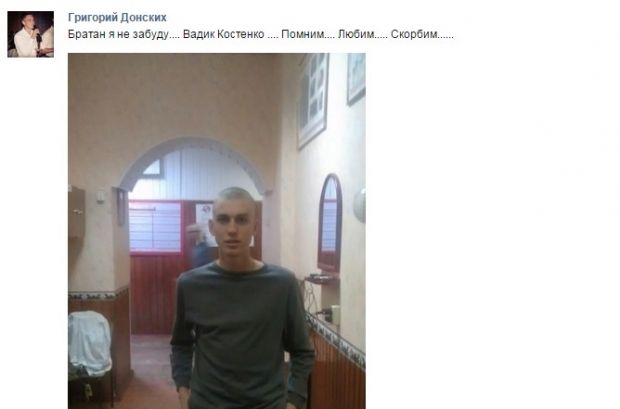 On October 25, the information about the death of a 19 year-old contractor from Krasnodar, Vadim Kostenko, was posted in social networks by his friends and relatives.

"By verifying information, his online profile, the profiles of his friends and relatives, we found plenty of evidence proving he was an acting military contractor; his conscription service ended in June 2015, and he immediately signed a contract," the CIT said.

Relatives of the victim told activists that the officers from the Primorsk-Akhtarsk military airfield of Krasnodar region had visited them. The 960th Attack Aviation Regiment of the First Guards Mixed Air Division of the Fourth Air Force Army and Air Defense is based at the airport. Russian Su-25 attack planes which are deployed in Syria are from this regiment, activists say.

"After completing military service in the 834th Air Force training center, Zernograd, Rostov region, Vadim signed a contract with the 960th Attack Aviation Regiment," the authors suggest. He was not a pilot, but was engaged in servicing equipment at the airport.

Read alsoBodies of 26 Russian marines killed in Syria brought back to Sevastopol: Ukrainian IntelligenceAccording to information, posted in social networks by his relatives, Kostenko died on October 24, 2015. On October 23, The Wall Street Journal (WSJ) published an article about Russia's participation in the military conflict in Syria, where it was reported about the first victim among Russian troops in Syria. The WSJ received a comment from a source in the Russian Defense Ministry, who had confirmed the death of one of the military (his name was not mentioned in the article), but he said that the soldiers had died not because of the fighting, but as a result of careless handling of weapons.

"If we imagine that as a result of careless handling of weapons there was a tragic incident and more than one soldier were injured, it is possible that at that moment Vadim could be wounded and died after the publication of the WSJ article," the authors of the investigation put forward their version of events.

A message by the Syrian activists of October 23 on the clouds of thick smoke from the Russian airbase Hmeymim in Latakia speaks in favor of the version about the accident, according to the CIT.

Read alsoCivilian deaths from Russia air strikes rising, activists claimThe CIT also said that the relatives of the military were discussing a "rumor" about another nine military killed.

The press service of the Defense Ministry failed to promptly comment on the death of a soldier.

One of Kostenko's relatives confirmed that on September 14, Vadim was sent to Syria, and on October 25, his family was informed about his death. According to a source, the recruitment office told his family that Kostenko had hanged himself. Later, the office said that the soldier had been found dead, without specifying details of the incident, according to a source.

In the coming days, according to the CIT, Kostenko will be buried in the village of Grechanaya Balka of Krasnodar region. The body of the soldier has not yet beendelivered to his relatives.