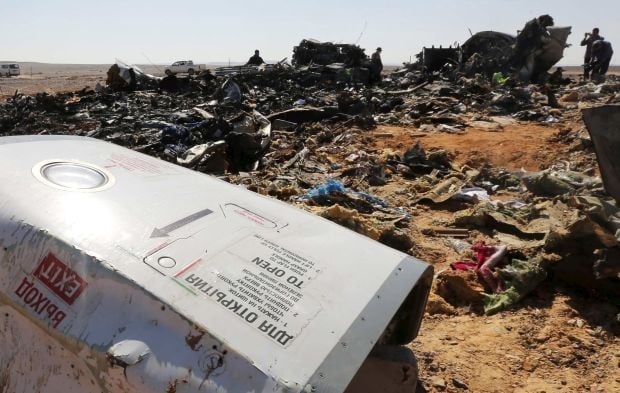 "Though we cannot fully rule out the possibility of a catastrophic structural failure, such an explanation would be unusual given the circumstances of the crash. Most aircraft accidents that involve a structural failure occur amid the physical stress of takeoff and landing; it is uncommon for aircraft to break apart at cruising altitude," the report says.

It is also unlikely that jihadists in Sinai shot down the aircraft with a man-portable air defense system, or MANPAD. Although militants in the area have managed to use a MANPAD to shoot down an Egyptian helicopter and have fired missiles at Israeli aircraft, Flight 9268 would have been well out of range of these weapons. In addition, according to an initial review of the flight data recorder, the aircraft was not struck by an object from outside the plane.

Finally, the crash probably was not caused by an electrical failure. Under such circumstances, the aircraft's pilots likely would have been able to maneuver the plane so that it glided to the ground without any sort of catastrophic consequences.

"Given the unlikelihood of the alternative scenarios, it seems that the most probable explanation for the downed plane is the existence of an explosive device onboard."

"Flight 9268 took off from Egypt's Sharm el-Sheikh airport, whose state of security is known to be particularly poor. The airport's security agents frequently offer to accept bribes in exchange for allowing passengers to bypass security screening checkpoints, and its cargo security screenings are not nearly as stringent as those conducted in the United States or Europe. While certain airlines, especially European and Israeli carriers, often require additional security checks because of heightened threats to civilian aviation, Russian carriers typically do not follow suit by requesting additional screening procedures."

Combined with the fact that it is quite easy to smuggle explosives onto an aircraft, the airport's lax security increases the likelihood that an explosive device detonated onboard Flight 9268. The device could have been carried by a person on the flight or loaded into the cargo hold. Stratfor will be watching carefully for any claims of responsibility that might shed more light on the perpetrators and their motives, but so far no credible claims have been made.