Russian artist sets on fire doors to FSB HQ in Moscow, gets detained

Russian artist Pyotr Pavlensky has been arrested for disorderly conduct outside the Federal Security Service (FSB) Headquarters on Lubyanka Square in Moscow, according to Russian Dozhd TV channel. 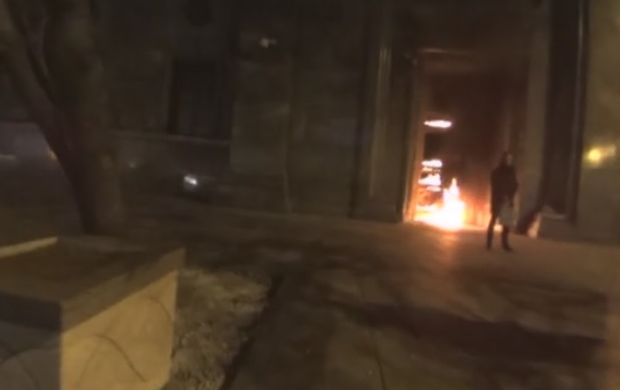 Pavlensky doused the front door with flamable liquid from a canister, then setting it on fire with a lighter at about 02:00 Moscow time. Police officers arrived at the scene shortly and arrested the artist, as well as two journalists.

By 06:00 local time, the detainees were taken to the police station, where the journalists were questioned as witnesses and were later released. Pavlensky was arrested on suspicion of disorderly conduct.

Read alsoMoscow police detain director of Ukrainian literature library (Photos)It appears, Pavlensky's stunt was partly effective: First Deputy Editor of Echo of Moscow Vladimir Varfolomeev tweeted that "the door of the first entrance of the FSB building on Lubyanka was partially burned or covered with soot," and there were traces of foam from the fire extinguisher on the pavement.

Pavlensky is now also tried in St. Petersburg for his 2014 performance titled "Freedom." That time, the activists burned tires on the Malo-Konushenny bridge, and Pavlensky was banging on metal, reproducing the "sound typical of the Maidan." During the court hearing on July 15, the artist made a vow of silence and refused to answer any questions.