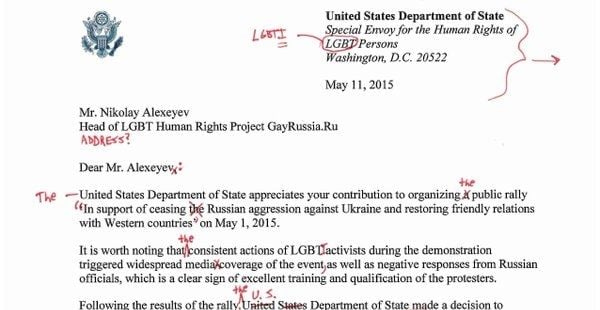 In a hilarious response, the U.S. Embassy in Moscow posted a scanned copy of the fake correspondence on its Facebook page, with school-style red marks pointing out multiple mistakes in the text.

The embassy also offered assistance in drafting such fake letters from the U.S. Department of State in the future.

Earlier, the newspaper used this "letter" in its article about the Russian politicians being discredited by LGBTI activists.

More than 20 errors of different nature were marked in the text of a fake letter from U.S. State Department employee to a Russian LGBTI activist, Nikolay Alekseyev.

One of the most outstanding mishaps of the Russian propaganda “experts” was specifying a Gmail mailbox as Mr.Berry’s official one.

Read alsoStopFake English Digest: Most discussed false news of the week debunked"Dear Izvestiya.rf, the next time you use a fake letter, send it to us - we will be happy to help correct errors. Sincerely, the U.S. State Department," they wrote.

Earlier, the Izvestia newspaper published an article on an “attempt to discredit the officials” of the Russian Federation through revealing their sexual orientation. The publication refers to the alleged exchange of correspondence between Russian LGBTI movement activist Nikolai Alekseyev and the U.S. State Department, obtained by hackers.