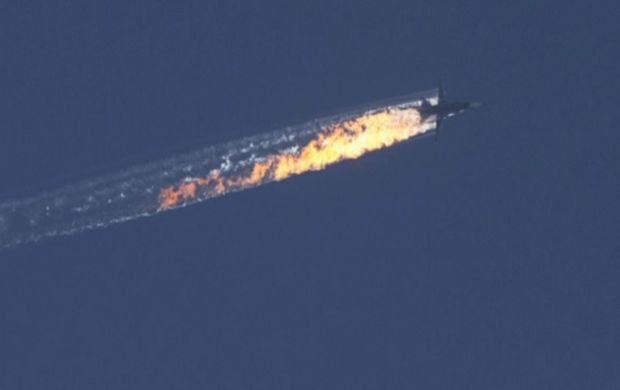 Turkish presidential sources said the warplane was a Russian-made Su-24. The Turkish military, which did not confirm the plane's origin, said it had been warned 10 times in the space of five minutes about violating Turkish airspace, the report reads.

Two Turkish F-16 jets “intervened” at 9:24 a.m. after the Russian jet violated the country’s airspace, Turkey’s military said in a website statement. Pilots warned the Russian plane 10 times in five minutes before it was hit, according to the statement, Bloomberg reports.

The jet was at a height of 6,000 meters (19,700 feet) and may have been hit from the ground, the Russian Defense Ministry said.  The ministry added it could prove the plane was over Syria for the duration of its flight, Interfax news agency reported.

Meanhwile, CNN Turk tweeted data regarding the route of the downed jet from flight radar.