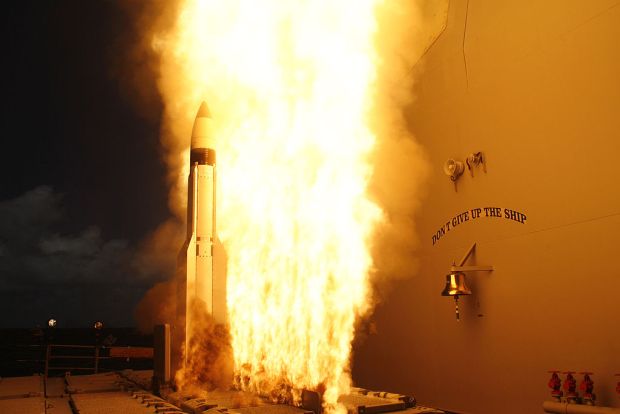 During the test, a target representing a medium-range ballistic missile was air-launched from a U.S. Air Force C-17 aircraft over the broad ocean area southwest of Hawaii, according to the report.

The kinetic warhead acquired the target reentry vehicle, diverted into its path, and destroyed the target using   the kinetic force of a direct impact.

The primary purpose of the test, designated Flight Test Operational-02 Event 1a, was to assess the operational effectiveness of the Aegis Ashore capability as part of a larger BMDS architecture.  Aegis Ashore uses a nearly identical configuration of the Vertical Launch System, fire control system, and SPY-1 radar currently in use aboard Aegis BMD cruisers and destroyers deployed at sea around the world.

Vice Admiral James D. Syring, MDA Director, said, "Today's test demonstrated that the same Aegis Ballistic Missile Defense capability that has been fielded at sea and operational for years, will soon be operational ashore as part of the European Phased Adaptive Approach (EPAA) Phase 2 capability in Romania.  I am very proud of the tremendous effort by the entire government/industry team in executing this vitally important mission for our Nation and our allies."

Read alsoU.S. completes complex test of layered missile defense systemAs UNIAN reported earlier citing Reuters, the U.S. military in early November hailed the success of a complex $230 million test of the U.S. missile defense system that it said showed the ability of the Aegis and Terminal High Altitude Area Defense (THAAD) weapons systems to identify and destroy ballistic and cruise missiles at once.