Intense air and missile strikes on a school district and other areas in insurgent-held Damascus suburbs killed dozens of people on Sunday, including children, a monitoring group and local rescue workers said, according to Reuters. 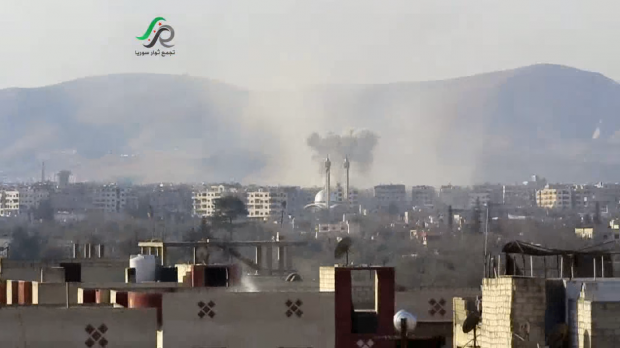 The Syrian Observatory for Human Rights said unidentified war planes hit the town of Douma, 10 miles (15 km) northeast of the capital, and surface-to-surface missiles fired by the Syrian army also hit the surrounding areas, including Eastern Ghouta, as reported by Reuters.

The strikes killed at least two children and a school principal, it said.

Syrian Civil Defense, a humanitarian rescue group that operates in rebel-held areas, put the death toll at 35 and said many others were wounded.

The Syrian army has said its strikes target insurgents that have launched attacks on government-held areas.

The Observatory, which has gathered information from a network of contacts on the ground since the start of the conflict in 2011, said at least 40 mortar bombs fired by insurgents in the eastern suburbs hit Damascus on Sunday, killing at least one child and wounding several.

State news agency SANA said three civilians had been killed and at least 30 wounded in mortar attacks targeting residential neighborhoods of Damascus. Most of the victims were school students, it said, citing its reporter in the area.