The UN Refugee Agency reports the year 2015 is likely to exceed all previous records for global forced displacement with almost a million people having crossed the Mediterranean as refugees and migrants so far this year, and conflicts in Syria and elsewhere continuing to generate staggering levels of human suffering. 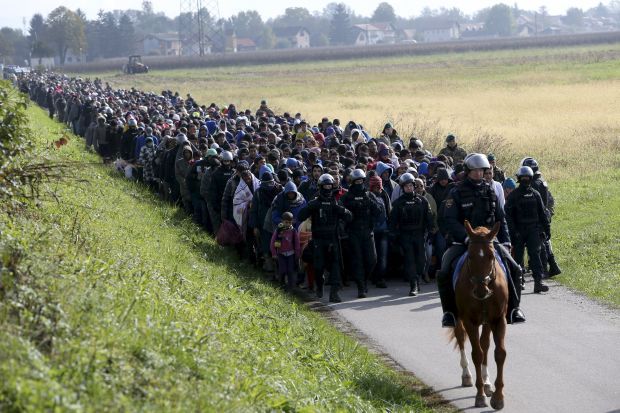 The UNHCR's Mid-Year Trends 2015 report, which was published on Friday, December 18, and covers the period from January to end June 2015, shows markers firmly in the red in each of the three major categories of displacement – refugees, asylum-seekers, and people forced to flee inside their own countries.

The global refugee total, which a year ago was 19.5 million, had as of mid-2015 passed the 20 million threshold (20.2 million) for the first time since 1992. Asylum applications meanwhile were up 78 per cent (993,600) over the same period in 2014. And the numbers of internally displaced people jumped by around 2 million to an estimated 34 million.

Indications from the first half of the year suggest 2015 is on track to see worldwide forced displacement exceeding 60 million for the first time. In a global context, that means that one person in every 122 has been forced to flee their home.

"Forced displacement is now profoundly affecting our times. It touches the lives of millions of our fellow human beings – both those forced to flee and those who provide them with shelter and protection," High Commissioner for Refugees Antonio Guterres said.

"Never has there been a greater need for tolerance, compassion and solidarity with people who have lost everything," he added.

Beyond the headline numbers, the report shows worsening indicators in several key areas. Voluntary return rates – a measure of how many refugees can safely go back home and a barometer of the global state of conflict – are at their lowest levels in over three decades (an estimated 84,000 people compared to 107,000 in the same period a year ago). In effect, if one becomes a refugee today their chances of going home are lower than at any time in more than 30 years.

New refugee numbers are also up sharply: Some 839,000 people in just six months, equivalent to an average rate of almost 4,600 being forced to flee their countries every day. Syria's war remains the single biggest generator worldwide of both new refugees and continuing mass internal and external displacement. However, the report notes that even with Syria's war excluded from the measurements, the underlying trend remains one of rising displacement globally.

Europe's influx of people arriving by boat via the Mediterranean is only partly reflected in the report, mainly as arrivals there have escalated in the second half of 2015 and outside the period covered by the report. Nonetheless, in the first six months of 2015 Germany was the world's biggest recipient of new asylum claims – 159,000, close to the entire total for all of 2014. The second largest recipient was the Russian Federation with 100,000 claims, mainly people fleeing the conflict in Ukraine.