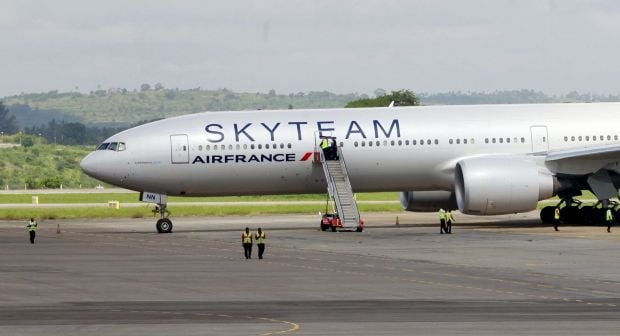 Air France staff decided to land the Boeing 777 at the nearest airport - in the Kenyan port city of Mombasa - after a passenger found the object in the toilets late on Saturday and alerted crew, CEO Frederic Gagey said, according to Reuters.

"From the photos provided by the Kenyan authorities, nothing in the object found posed a threat for the plane or passengers," he said.

Air France said it planned to take legal action over the incident, without giving further details.

The 459 passengers and 14 crew on board flight AF463 were evacuated using the emergency slides after the plane landed at 2136 GMT.

Kenyan Interior Minister Joseph Nkaissery told reporters at Mombasa's Moi International Airport on Sunday that an undisclosed number of passengers were being questioned about the suspect device, but did not say if they were under arrest.

Air France said in a statement it had "immediately decided to reinforce the security measures in Mauritius" after the incident, which follows three bomb alerts in the United States in the last few weeks, according to the report.