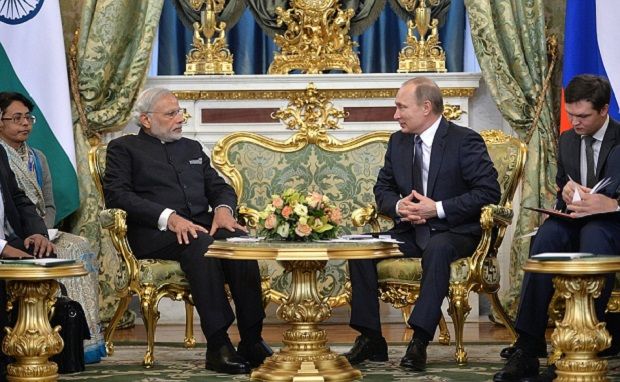 A package of 15 documents was signed in the presence of Putin and Modi / Photo from kremlin.ru

The sides agreed that the internal armed conflict in Syria cannot be resolved by force and can be settled only by political and diplomatic means – through substantive intra-Syrian dialogue without any preliminary conditions or external interference and on the basis of the Geneva Communique of June 30, 2012; the Joint Statement on results of multilateral talks on Syria in Vienna of October 30, 2015 and a statement of the International Syria Support Group adopted on November 14, 2015, the document said, TASS wrote.

Russia and India also voiced resolute and decisive support for the people and government of Iraq in their efforts to overcome the current crisis and defend the country's national sovereignty and territorial integrity, the Russian and Indian leaders said in their joint statement stressing the importance of reaching national reconciliation and unity in Iraq by forming an inclusive state system and strengthening national democratic institutions by creation of relevant opportunities.

Putin pointed to the proximity of positions Moscow and New Delhi take on acute international issues. "It is important Russia and India make similar approaches to key international problems. Our countries are for a political settlement of the conflict in Syria and promotion of national reconciliation in Afghanistan," Putin told the media after talks with Modi. "We are certain that it is in the interests of the world community to form a wide anti-terrorist coalition operating on the basis of international law and under the auspices of the United Nations," Putin said.

A package of 15 documents was signed in the presence of the two leaders.

Russia's JSC Digital TV and India's Prasar Bharati signed a memo of understanding on cooperation in the field of broadcasting, as well as cooperation on advanced computer systems development in the field of design and development of navigation receivers supported by GLONASS and IRNSS. Russia's Federal Customs Service and India's Main Directorate of Excise and Customs agreed on interaction in fighting customs offenses in 2015-2017. Russia's state nuclear agency Rosatom and the Department of Atomic Energy under the government of India agreed on setting up a local production of equipment for the nuclear power plants in India which are built by Russian specialists.

Putin and Modi also discussed prospects of participation of Russian businesses in implementation of India's program of import substitution. "We've discussed the prospects of participation of Russian businessse in implementation of India's import substitution program, which is called 'Made in India.'  We see it as an additional opportunity of setting joint ventures, sharing technologies, producing high value-added products," Putin said.