German police in Cologne rolled out water cannons to break up an anti-Islamization demonstration on Saturday after protesters had attacked officers with fireworks and bottles, marking an escalation of tensions following the alleged New Year's Eve sexual assaults on dozens of women in the city at the hands of foreigners, including some refugees, according to Brussels-based news website Politico. 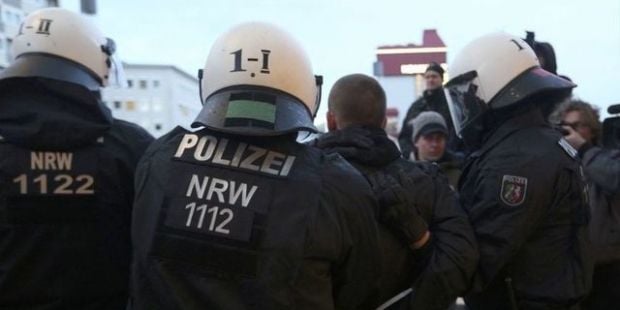 About 1,700 people, including hundreds of self-described hooligans and other far-right elements, turned up for the march through the city's center to protest the New Year's Eve attacks, according to the report.

A number of left-wing groups staged counter-protests that drew about 1,300 participants.

Though the police succeeded in keeping the two sides from clashing, the show of force didn't dissuade some in the anti-Islam group, known as Pegida (a German acronym for Patriotic Europeans against the Islamization of the West) from attacking the officers.

A group of about 100 people at the head of the Pegida march pelted police with bottles and firecrackers as protestors chanted "we are the people" and waved German flags, according to local media reports and video footage from the scene.

As reported earlier, the police in Germany are investigating an alarming series of sexual assaults on women trying to celebrate the New Year by large groups of single men "of Arab or North African appearance."

The police have received 90 criminal complaints, around a quarter of them for sexual assault, including one case of rape.