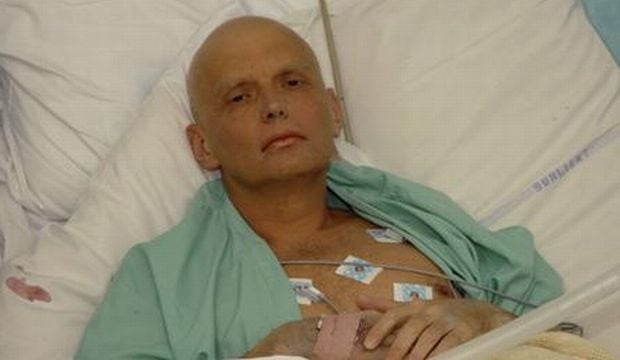 After drinking a cup of tea in a London hotel on November 1, 2006, Litvinenko began vomiting, lost hair and suffered blistering in his mouth / Photo from www.telegraph.co.uk

This is the stark view of Norman Dombey, emeritus professor of theoretical physics at the University of Sussex, The Guardian wrote.

"Almost anywhere else on Earth, Litvinenko's death would have been merely suspicious and its cause would have remained unknown," he said.

Dombey was a key witness at the inquiry, held in London last year, into the former Russian spy's murder. The inquiry's report is to be published on Thursday and may well conclude that the Russian state was responsible either on the balance of probabilities or beyond reasonable doubt.

However, the inquiry would never have been held, nor would the murder of Litvinenko have been revealed, had it not been for the location where his poisoners chose to slip him a fatal dose of polonium. After drinking a cup of tea in a London hotel on November 1, 2006, Litvinenko began vomiting, lost hair and suffered blistering in his mouth. He was taken to Barnet general hospital and then transferred to University College hospital. The latter has links to nearby University College London and its medical physics department. Experts there attempted to trace the cause of Litvinenko's illness.

The puzzle was straightforward: the former Russian agent – who had fled his native country in 2000 – showed all the symptoms of radiation poisoning but produced no signs of radioactivity when tested with Geiger counters. The issue turned out to be one directly concerned with the nature of radiation.

Samples from the agent were sent to the UK Atomic Weapons Establishment, at Aldermaston in Berkshire. There, scientists suspected that polonium, a powerful alpha emitter, was involved. Polonium sticks to metal, so a silver disc was suspended in the body fluids taken from Litvinenko. The disc attracted a substance whose alpha particles had a particular energy signature that matched the isotope of polonium known as polonium 210.

"Virtually all the world's supply of that particular isotope is made at the nuclear weapons assembly plant at Avangard in Russia," added Dombey. "That points a finger directly at Russia. However, had it not been for the experts on hand in London, that link would never had been made."