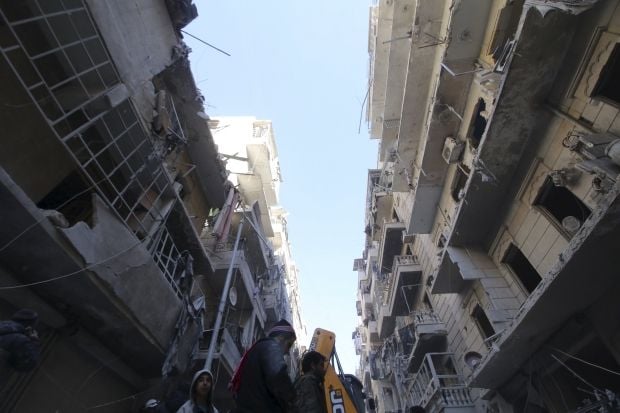 Secretary of State John Kerry is pushing for a ceasefire and more aid access to Aleppo, where rebel-held areas are being cut off and the United Nations has warned a new humanitarian disaster could be on the way.

Aid workers said on Wednesday the water supply to Aleppo, still home to two million people, was no longer functioning.

Kerry is hoping for agreement at a meeting in Munich on Thursday between Russia, the United States, Saudi Arabia, Iran and other powers, aimed at trying to revive peace negotiations that foundered earlier this month.

Syrian officials have indicated no plans to ease up the war effort. A Syrian military source said on Wednesday the battle for Aleppo, a major prize in a war which has killed a quarter of a million people, would continue in "all directions."

Syrian Information Minister Omran al-Zoubi said the government expected a tough but relatively short battle to return the city to state control. "I do not expect the battle of Aleppo to go on long," he told Reuters in Damascus.

A Western official said Russia had made a proposal to begin a ceasefire in Syria on March 1, but that Washington has concerns about parts of it and no agreement had been reached.

In Washington, a state department envoy told Congress the United States needs to consider options in case the diplomatic push does not succeed.

Asked how soon a ceasefire could be put in place, a Russian diplomat who declined to be identified said: "Maybe March, I think so."

At a closed-door meeting of the 15-member U.N. Security Council on Wednesday, several members pressed Russia to end the Aleppo bombing sooner.