The Guardian: Refugees are becoming Russia's weapon of choice in Syria

Turkey sees targeting of civilian hubs as a deliberate attempt to create mass outflow of people and vacuum for pro-Assad forces to fill, according to The Guardian. 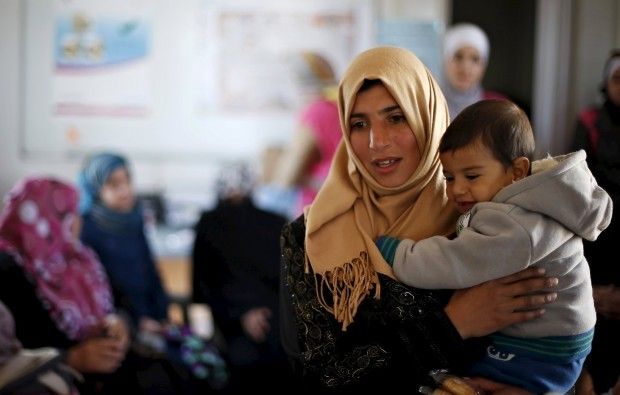 Russia's flat denials of responsibility for the lethal bombing of hospitals and schools in Syria cut no ice in Ankara. Senior Turkish officials say Vladimir Putin and his Syrian allies are shamelessly using increased refugee outflows resulting from these and similar attacks as a weapon of war – one that is deliberately aimed at Turkey and Europe, The Guardian wrote.

Dmitri Peskov, the Kremlin spokesman, categorically rejected claims by Turkeyand other countries that Russian forces, acting in support of Bashar al-Assad's regime and Syrian Kurd militias, had committed war crimes in mounting Monday's strikes, which killed about 50 people. "Those who make such statements are not capable of backing them up with proof," Peskov said.

Reacting to Moscow's denials and its decision to seek UN security council condemnation of Turkey's cross-border shelling, Ahmet Davutoğlu, Turkey's prime minister, said Russia's behaviour was "shameless" and "insolent." Turkey would not allow a new influx of refugees from northern Syria, he said, and would take "every step necessary" to prevent such an eventuality.

"If Russia continues behaving like a terrorist organisation and forcing civilians to flee, we will deliver an extremely decisive response," Davutoglu told parliament. "Those vile, cruel and barbaric [Russian] planes have made close to 8,000 sorties since September 30 without any discrimination between civilians and soldiers, or children and the elderly."

More than 50,000 people have been displaced by recent fighting around Aleppo. Turkey is increasingly concerned by territorial gains by militia fighters of the Syrian Kurd Democratic Union party (PYD), whom it regards as terrorists and mercenaries in league with Moscow. The Kurdish advances, including seizure of the important Menagh air base, were supported by Russian airstrikes. Turkey responded by shelling Syrian Kurd positions.

Excerpts from a report by Turkey’s security services, published on Tuesday in Hurriyet newspaper, highlighted Turkish suspicions that Russia was purposefully attempting to "weaponise" the refugee crisis.

The report warned: "Regime forces and allies are trying to create a new refugee wave by moving towards Azaz [in northern Syria] ... There are 10 refugee camps between this town and Turkey’s town of Kilis, approximately along an eight-kilometre line. The residents of these camps will likely flee and seek shelter in Turkey while these camps would be taken by the PYD or Assad forces."

Security officials told the paper that Russia was employing tactics previously used in the first Chechen war in the north Caucasus in the 1990s, known as the "Grozny model." This involved forcibly emptying urban residential areas through a campaign of attrition against the local population. Once this was achieved, heavy weapons were deployed to eradicate opposing forces, entailing widespread destruction of homes and infrastructure.

Given Assad's previous documented use of barrel bombs, chemical weapons, airstrikes and heavy artillery against civilian areas, Russia’s alleged tactics hardly seem new. What appears to be different is the deliberate creation of tactical refugee emergencies to influence outside actors who must deal with the fallout.

Speaking at the weekend, U.S. senator John McCain, a fierce critic of the Obama administration's policy of non-intervention and a noted hawk, said Russia's strategy was "to exacerbate the refugee crisis and use it as a weapon to divide the transatlantic alliance and undermine the European project."

European politicians attending the weekend Munich security conference, prior to Monday's attacks, echoed McCain's concerns saying shops, schools and hospitals were being targeted in an attempt to force the local population to capitulate andincrease the flow of refugees towards Turkey and Europe.

Airstrikes similar to those on Monday have happened before. U.S. officials say Russian and regime forces destroyed both of Aleppo's main hospitals last week. In total, there have been 14 known attacks on medical facilities this year alone.

If Russia really is using refugees to gain advantageous political and military leverage, it may be working. Turkey is under intense pressure from the U.S. to stop shelling the Syrian Kurds, whom Washington supports. For this and other reasons, relations between the two Nato allies have hit a new low.

Turkey is at odds with France, which would prefer Ankara to prioritise the fight against Islamic State terrorists based in north-east Syria, and with the EU as a whole over how best to manage the refugee crisis.

Doubtless to Putin's delight, the intensifying refugee emergency is also dividing the U.S. and Europe, with Laurent Fabius, the former French foreign minister, accusing Washington of a lack of commitment. The decision by Angela Merkel, Germany's chancellor, to open the door to Syrian refugees is under growing fire at home, and has been labelled unsustainable by Manuel Valls, France's prime minister.

In a policy shift, Merkel is now backing long-standing Turkish calls for a no-fly zone in northern Syria to halt the exodus by protecting civilians in situ – an idea repeatedly blocked by Barack Obama. For its part, Turkey is pressing all its western and Gulf allies to join in a more ambitious, military ground operation inside Syria – another escalatory option that, judging by past performance, will be opposed by the risk-averse U.S. president.