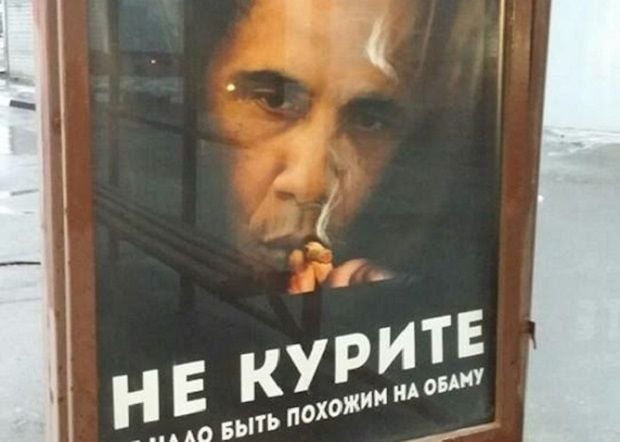 The poster has a photoshopped image of the U.S. president and the words: "Smoking kills more people than Obama, although he kills a lot of people. Don't smoke — don't be like Obama," The Moscow Times wrote.

Russian State Duma opposition deputy Dmitry Gudkov published a photograph of the bus stop poster on Facebook, adding a Soviet joke about freedom of speech in the United States versus the Soviet Union — essentially, Soviet citizens were free to criticize U.S. presidents while standing in Red Square.

"In fact, I am disgusted and ashamed of what appears on the streets of the Russian capital," Gudkov said.

Obama has often been targeted in racist and anti-American campaigns. In December 2015, a major Russian supermarket chain apologized after selling a chopping board with Obama pictured as a chimpanzee.

In January a pro-Kremlin art community hung a banner depicting Obama, with the caption "killer," opposite the U.S. Embassy in the center of Moscow.

Tobacco use causes nearly 6 million deaths annually, and is projected to cause 8 millions deaths per year by 2030, the Centers for Disease Control and Prevention reported in December 2015.

In 2009 Obama said that he "constantly" struggles with cigarettes. "I would say that I am 95% cured," Obama said, "But there are times where I mess up."

At a 2013 event, Obama said that it was Michelle Obama who "scared" him into quitting smoking. "I haven't had a cigarette in six years," the president said. "That's because I’m scared of my wife."