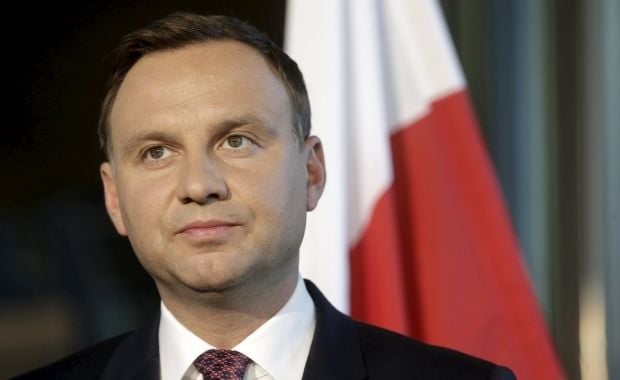 In an interview with Reuters, Duda hit back at comments by Russian Prime Minister Dmitry Medvedev, who last week described East-West relations as descending "into a new Cold War" and said NATO was "hostile and closed" toward Russia.

"If Mr Medvedev talks about a Cold War, then looking at Russian actions, it is clear who is seeking a new Cold War," Duda, allied to Poland's ruling Law and Justice Party (PiS) said in an interview in his presidential palace in Warsaw.

"If someone is undertaking aggressive military activities in Ukraine and Syria, if someone is bolstering his military presence near his neighbors ... then we have an unequivocal answer regarding who wants to start a new Cold War. Certainly, it is not Poland or the NATO alliance."

The West says it has satellite images, videos and other evidence that show Russia is providing weapons to anti-government rebels in Ukraine, following Russia's annexation of Crimea from Ukraine in 2014. Russia denies such accusations.

Poland has long been one of the fiercest critics of Russian actions and PiS is especially mistrustful. It wants a summit in Warsaw this year to bolster NATO's presence in central and east Europe by positioning troops and equipment on Polish soil.

Duda reiterated Polish ambitions for an "intensive" NATO presence on its territory to be agreed at the July summit, which would be "tantamount to a permanent presence" -- an arrangement that would be assured by troop rotations. Some NATO allies are reluctant, out of concern over the cost and the further deterioration with Moscow that would be likely to result.

Duda's unexpected election victory last May was the first ballot win for PiS in almost a decade. It helped the party win a parliamentary vote in October on a campaign of conservative values and more economic equality.

A relatively unknown politician before the election, Duda, 43, sees himself as a spiritual and political heir to Poland's late president, Lech Kaczynski. Kaczynski, the twin brother of PiS leader Jaroslaw, died in a plane crash in 2010.

Local critics say Duda and Prime Minister Beata Szydlo merely follow the lead of Jaroslaw Kaczynski rather than make their own policy -- an accusation he rejected in the interview, saying he was there to implement PiS's agreed program.

Duda said Poland was ready to participate in any NATO efforts in Syria, but without sending troops, an offer the Polish government has made before. In return, it wants NATO to bolster its presence in eastern Europe.

"We are not shirking our responsibility here," Duda said. "There are no decisions yet, but we are a member of the alliance."

Duda said Poland would be willing to use some of its fleet of F-16 fighter jets for reconnaissance missions and to participate in training missions.

A coalition led by the United States is bombing Islamic State targets in Syria and Iraq, where the militant group occupies swathes of territory.

The United States is pressing NATO to play a bigger role in the campaign, putting Washington at odds with Germany and France. They fear the strategy would risk confrontation with Russia, which is conducting its own air strikes in the region in support of its ally, Syrian President Bashar al-Assad.

All 28 NATO allies are already part of a 66-nation anti-Islamic State coalition, so the United States is looking to NATO to provide equipment, training and the expertise it gained in Afghanistan, where Poland also had troops.