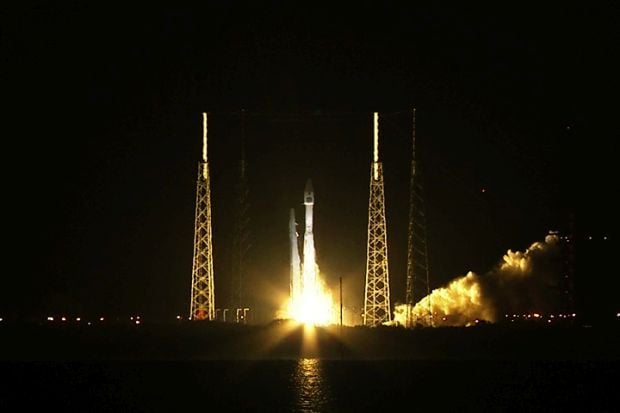 Aerojet Rocketdyne’s share of development costs, under that scenario, would top $268 million / Photo from nasa.gov

Aerojet Rocketdyne will use the money to help develop its AR1 rocket engine. ULA will develop a prototype of its Vulcan launch vehicle with the BE-4 engine and work on its next-generation upper stage engine known as the Advanced Cryogenic Evolved Stage, or ACES, Spacenews wrote.

The contracts are among the Air Force’s top space acquisition priorities for 2016.

Following the Crimean crisis of 2014, Congress directed the Defense Department to develop domestic propulsion systems that would enable the Air Force to end its reliance on the Russian-built RD-180 by 2019. That engine powers ULA’s Atlas 5 rocket, which is used to launch a majority of national security satellites.

The Air Force said in June it intended to award a total of $160 million to fund work on both main- and upper-stage rocket engines. Industry would be required to cover at least one-third of the costs of their proposed development efforts, but the actual size of the government investment would vary from proposal to proposal. But once the Air Force awarded four contracts the initial total was $242 million, including $115 million to Aerojet Rocketdyne.

"Having two or more domestic, commercially viable launch providers that also meet national security space requirements continues to be our end goal," Lt. Gen. Samuel Greaves, commander of the Air Force’s Space and Missile Systems Center, said in a press release. "These innovative public-private partnerships with industry as they develop their rocket propulsion systems are a key part of the [Evolved Expendable Launch Vehicle] acquisition strategy to assure access to space and address the urgent need to transition away from strategic foreign reliance."

Aerojet Rocketdyne’s AR1 that, like the RD-180 it is intended to replace, is fueled by liquid oxygen and kerosene. The initial value of the contract the Air Force awarded Aerojet Rocketdyne February 29 is $115 million but options could raise the potential government investment to $536 million. Aerojet Rocketdyne’s share of development costs, under that scenario, would top $268 million.

"AR1 will return the United States to the forefront of kerosene rocket propulsion technology," Eileen Drake, Aerojet Rocketdyne’s chief executive officer, said in a press release. "We are incorporating the latest advances in modern manufacturing, while capitalizing on our rich knowledge of rocket engines to produce a new, state-of-the-art engine that will end our reliance on a foreign supplier to launch our nation’s national security assets."

Aerojet Rocketdyne executives say they plan to test the first AR1 development engine in 2017, followed by additional testing in 2018 and to provide a certified engine in 2019.

Following the Pentagon’s announcement, the company said Huntsville, Alabama-based Dynetics will become a subcontractor for the work and supply elements of the engine’s main propulsion system, ignition system and ground support equipment.

ULA announced in September 2014 that its first choice for a new engine for its Vulcan rocket is the BE-4, a liquid-natural-gas fueled engine that cannot be used on the Atlas 5 as currently designed. Blue Origin of Kent, Washington, owned by Amazon.com founder Jeff Bezos, is developing that engine using its own funds.

The Air Force awarded ULA a $46 million contract February 29 to develop a prototype of the Vulcan rocket using the BE-4 and the upper stage engine. With options, the potential government investment in Vulcan could reach $202 million. ULA, a joint venture between Boeing and Lockheed Martin, would be expected to contribute as much as $134 million under that scenario.

ULA said the Air Force funding would help integrate the BE-4 with the Vulcan launch vehicle.

"While the RD-180 engine has been a remarkable success with more than 60 successful launches, we believe now is the right time for American investment in a domestic engine," Tory Bruno, ULA’s president and chief executive officer, said in a release.

ULA has said the Vulcan’s first flight could be as early as 2019 and that the ACES upper stage engine could fly as early as 2023. Last year, ULA officials said an ACES-equipped Vulcan, augmented by strap-on boosters, would have 30 percent more lift capacity than the Delta 4 Heavy, currently the largest vehicle in the U.S. fleet.

ULA has a contract with Aerojet to retain the AR1 as a backup in case the BE-4 effort falters. ULA is expected to choose which engine it will develop for Vulcan late this year.