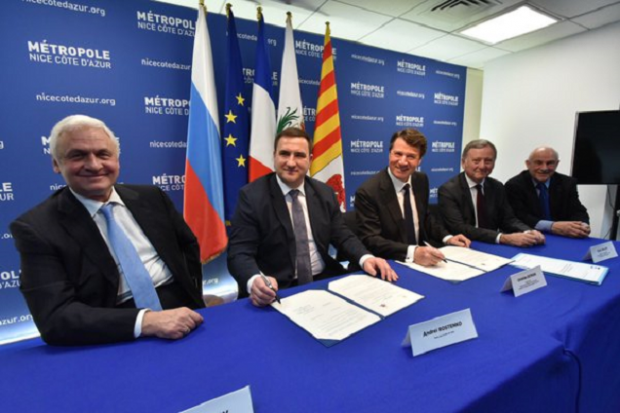 "Agreements have been reached on the reciprocal visit of the Nice mayor to Crimea, to Yalta, with the goal of signing a cooperation agreement. The possible date is the second half of May," said Rostenko who arrived in France, according to Ukraine Today.

However, Euromaidan Press writes that a letter of intention of developing friendly relations between the two cities was signed during the meeting, according to the statement: "Following the signing of the Sister City Agreement between Yalta and Nice on 26 November  1960, the mayor of Nice, in the presence of the ambassador of Russia in France, met with the mayor of Yalta Andrew Postenko to sign a letter of intent for the development of friendly relations and restoration of twin-city relations between Yalta and Nice."

Commenting the visit, Estrosi mentioned to the local TV channel  Azur TV that "Yalta is situated in Crimea and is part of the Russian Federation. And the French-Russian friendship that we have between Nice and Russia is a great opportunity to strengthen the connections by signing a letter of intentions to restore sister-city relations between Nice and Yalta."

A tweet from Christian Estrosi shows scenes from the visit, including the signing of the letter.

Meanwhile, the Ukrainian ambassador to France Oleg Samshur has sent a letter in which he condemned the visit of the "so-called ‘mayor' of Yalta."

The letter, sent on  March 2, 2016, stresses that Mr. Estrosi "should know that that the annexation of Crimea is condemned by the international community as a flagrant violation of international law and fundamental principles of European security, that France is in the avant-garde of the diplomatic efforts to support the Ukrainian sovereignty, that the representatives of the occupation authorities are under sanctions, and that the occupation has given rise to massive violation of human rights particularly those of Crimean Tatars. It underlines that, as Mr.Estrosi is an experienced politician, it is clear that this was a deliberate initiative that goes against the position of the international community, of France and democratic values, and that the presence of the ambassedor of Russia, the occupant county at this meeting is even more striking. The letter requests him to clarify publicly if he supports the annexation of Crimea, in violation of international law." 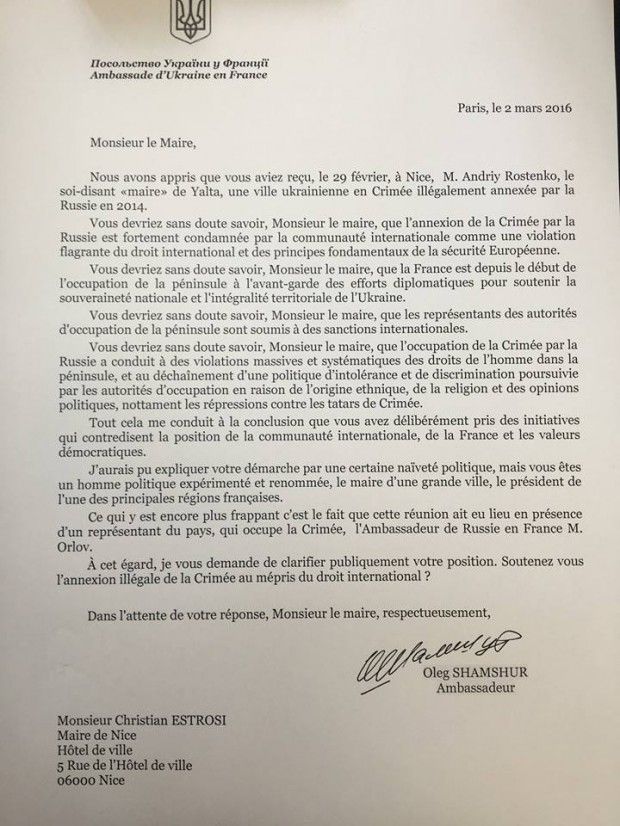 Christian Estrosi, is a member of the opposition center-right party of the Republicans party, led by former French President Nicolas Sarkozy. He has repeatedly expressed his support for the Russian Federation and criticized the reluctance of French authorities to supply the Mistral warships to France.

Read alsoProsecutors go after "Putin’s friend" for visiting occupied CrimeaUkraine announced February 20, 2014 as the official date of Russia's temporary occupation of Crimea and Sevastopol. International organizations say the occupation and annexation of Crimea is illegal and condemned Russia's actions. Western countries imposed a series of economic sanctions against Russia.

Kremlin denies these accusations, calling the move a 'restoration of historical justice.' In the meantime, Moscow reportedly keeps turning the annexed Crimea into a military base.