Russian pullback from Syria: varying interests of Moscow and Damascus

Russian President Vladimir Putin at a Monday meeting with his Foreign Minister Sergey Lavrov and defense chief Sergey Shoigu ordered to start on March 15 the process of withdrawal of the major part of Russian troops deployed in Syria. Russian airbase in Hmeymim and a naval base in Tartus are to remain in operation.

Partial pullback of the Russian contingent from Syria is connected with the achievement of goals and objectives by the military-political leadership of the Russian Federation. Air strikes Russian air group allowed breaking down the offensive efforts of the Syrian opposition against Syrian President Bashar al-Assad’s regime and moreover, assisting in tactical offensive of the Syrian government forces in a northern direction near Aleppo.

A key shift in the situation was the suppression of opposition groups resulting in seizing control taking control over the border with Turkey to the north of Aleppo by Kurdish units and Assad's forces, which made it possible to cut the supplies to the opposition fighting to overthrow the current regime. Another tactical advantage was in gaining control over the section of the Palmyra-Deir ez-Zor highway that used to connect ISIL forces in Palmyra with the territory of Iraq. 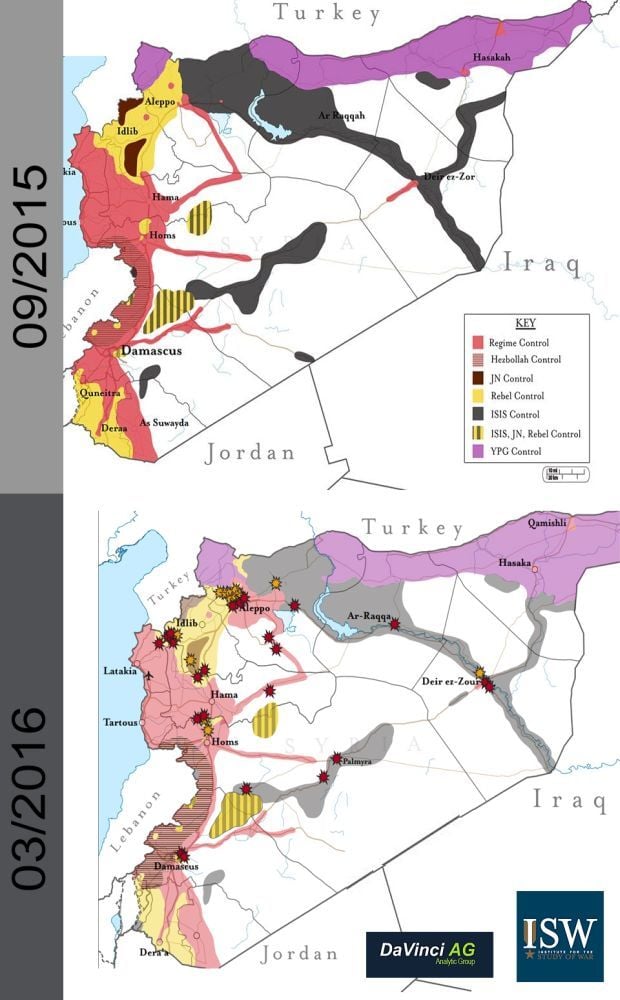 Institute for the study of war

For the Kremlin, saving Bashar al Assad's regime is not only important in terms of retaining influence and position in the region, but also as an element of demonstration of Russia’s capabilities in geopolitical confrontation with the United States. Having resisted the collapse of the Assad regime, the Kremlin shows the ability to effectively counter the U.S. interests in the region and will try to use it to attract allies in the Middle East and Central Asia.

Had Russia decided to keep the number of troops deployed in Syria unchanged, this would have reduced overall effectiveness of military efforts, as the airstrikes alone proved unable to change the balance of power under conditions of a non-traditional warfare by insurgents and ISIL militants.

Another tactical advantage was in gaining control over the section of the Palmyra-Deir ez-Zor highway that used to connect ISIL forces in Palmyra with the territory of Iraq.

At the same time, a comparative analysis of operating environment in September 2015 and March 2016 gives grounds to assert that the operation of the Russian military in Syria against radical groups has failed. Despite extensive air strikes, ISIL managed to seize more territory to the north-west of Daraa. Areas controlled by ISIL and other militants, including Jabhat al Nusra, have by March 2016 remained within the territories occupied back in September 2015. The areas controlled by the pro-Iranian Hezbollah also expanded to the south near the border with Lebanon, as the group took over the position of Bashar al Assad’s regime. In addition, ISIL seized control over the territory to the south-east of Hasakah. Therefore, Russian military intervention has successfully neutralized the threat to the Bashar al-Assad’s regime, but it has not been able to reduce the size of ISIL-controlled territory, while this radical group has, on the contrary, extended its zone of influence in Syria.The outcome of Russia’s activities is temporary and does not rule out the possibility of resumed offensive against the Syrian government forces. This explains the need to keep the Russian bases in Latakia, while reducing the number of troops in order to save resources, as each day of Syrian campaign cost the Russian budget $2.5 million. An important motivation is also a desire to minimize participation in the conflict against the background of ceasefire talks, the risk of deterioration of the humanitarian situation, and increasing activity of Kurdish groups. The Kremlin aims at avoiding responsibility for the further developments in Syria.

The outcome of Russia's military campaign in Syria proves impossible changing the situation without a full-scale deployment of Russian ground forces, which would lead to significant losses in manpower and equipment.

Partial withdrawal of the Russian troops also points out that the Kremlin is comfortable with the current balance of forces, while the preservation of threats to Bashar al-Assad’s regime makes the Syrian leader more tractable in a political dialogue between Moscow and Damascus. The Syrian government is strategically interested in seizing control over Idlib, which would allow connecting the cities of Hama and Homs with the earlier retaken area around Aleppo.

However, there is a high probability that the basic interests of the Kremlin are at odds with the interests of Bashar al-Assad. Report by Da Vinci AG of October 2015 indicated likelihood of plans to divide Syria. The initiative launched by Syrian Kurds from the Democratic Union regarding federalization of the state and the establishment of three Kurdish cantons in Syria’s north confirm such forecast. Federalization concept is a typical management model Russia seeks to impose onto the areas of its interests.

Partial withdrawal of Russian troops from Syria has no direct influence on the change of the situation in the east of Ukraine. The forces and resources involved in the Russian operations in Syria are not identical to those used by Russia in the Ukrainian Donbas. Escalation in the zone of the Anti-Terrorist Operation depends entirely on the Kremlin’s political will.

Russia has enough forces, both in the occupied territories and near the Ukrainian border to launch a large-scale offensive against Ukraine. However, according to our estimates, such decision would not be related to the dynamics in Syria. There is still a high-level risk of a resumption of hostilities in the east of Ukraine.