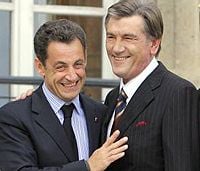 The President of France, which has a presidency over EU, says about an intention to promote movement of Ukraine to the European Union.

According to an own UNIAN correspondent, he said this today, delivering a speech at the session of the European Parliament in Strasbourg.

“We have to promote the movement of Ukraine to EU”, said the President of France.

“At the same time he noted that the issue on membership of Ukraine in the EU will not be easy issue because the matter is in rather big country, the population of which is near 50 million people. “It is “not small” decision”, said N. Sarkozy