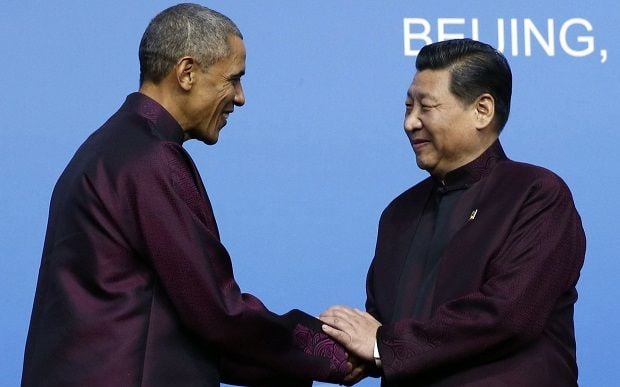 "The two Presidents announce another significant step in their joint climate efforts. The United States and China will sign the Paris Agreement on April 22nd and take their respective domestic steps in order to join the Agreement as early as possible this year," the White House said in a statement on March 31.

They encourage other parties to the United Nations Framework Convention on Climate Change to do the same, with a view to bringing the Paris Agreement into force as early as possible.

They recognize that the Paris Agreement marks a global commitment to tackling climate change and a strong signal of the need for a swift transition to low-carbon, climate-resilient economies. In this regard, the presidents are also committed to working bilaterally and with other countries to achieve successful outcomes this year in related multilateral fora, including on an HFC amendment under the Montreal Protocol pursuant to the Dubai Pathway and on a global market-based measure for addressing greenhouse gas emissions from international aviation at the International Civil Aviation Organization Assembly.

To accelerate clean energy innovation and deployment, they will work together to implement the goals of the Mission Innovation initiative announced at the Paris conference and carry forward the work of the Clean Energy Ministerial. They support a successful G-20 Summit in Hangzhou this year, including strong climate and clean energy outcomes, and call on the G-20 countries to engage constructively in international cooperation on energy and climate change. And they will continue to deepen and broaden bilateral cooperation through the U.S.-China Climate Change Working Group, the U.S.-China Clean Energy Research Center, and other efforts.