A major earthquake hit Ecuador's central coast, killing at least 77 people as it buckled homes and knocked out power in a city hundreds of miles away, authorities said, according to CNN.

Nearly 600 people were injured, he said, adding that the death toll is expected to go up as more information comes in.

A state of emergency is in effect for six provinces, but Glas urged those who left their homes in coastal areas to return, as the tsunami alert had been lifted.

Provinces under a state of emergency are Guayas, Manabi, Santo Domingo, Los Rios, Esmeraldas and Galapagos. 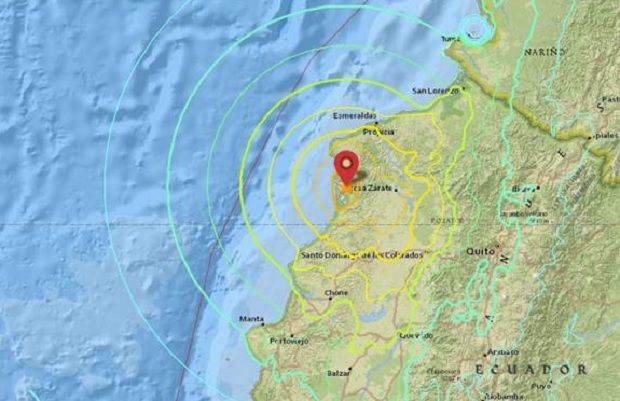 Hours after the earthquake, the nation's soccer federation said it has suspended the remaining matches of the current round of the Ecuadorean championship.

The interior ministry also ordered all nightlife venues in affected areas closed for the next 72 hours.

That was the control tower Airport #Manta after earthquake in Ecuador pic.twitter.com/OzcUHnumvO

All mobile operators are allowing free text messages for customers to reach out to loved ones in Manabi and Esmeraldas provinces, the vice president said.

In a race to help residents, Ecuador deployed 10,000 soldiers and 3,500 police officers to the affected areas, he said.

The tremor was centered 27 kilometers (16.8 miles) southeast of the coastal town of Muisne, according to the U.S. Geological Survey.

It's the deadliest earthquake to hit the nation since March 1987, when a 7.2-magnitude tremblor killed 1,000 people, according to the USGS.