Number of tanks increased across Syrian border against IS – Hurriyet 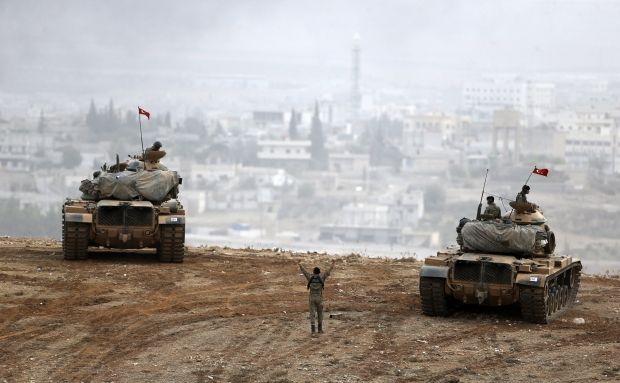 The Turkish Armed Forces (TSK) increased precautions along the border after the jihadist group's multiple attacks on the southern province of Kilis, which lies on the country's Syrian border.

Turkey mostly hits ISIL targets with 40 kilometer-ranged howitzers deployed on the border, as it can't launch airstrikes against ISIL targets in Syria due to tension with Russian.

Aside from the howitzers, a new unit of tanks was sent to Kilis' border in order to reinforce the tank units deployed, which use thermal cameras and cannons.

In addition to the howitzers and tanks, 120 millimeter grooved heavy shells have been fired, while mini drones are being used in order to locate the Katyusha rockets that ISIL places in pick-up trucks, security sources told daily Hurriyet.

Read alsoThe Washington Post: Russian artillery, Syrian troops shifting back to northern SyriaSpeaking about the new practices along the border, security sources added that ISIL suffered heavy losses due to the Turkish deployment of drones along with the strikes.

Furthermore, intelligence gathering has increased with an "intelligence cell" formed specifically for ISIL-related intel at Incirlik Air Base in the southeastern province of Adana, allowing local intelligence sources to be used more efficiently, according to reports.

The security sources said the most significant precaution against ISIL would be to conduct airstrikes on ISIL targets, but due to the tension between Turkey and Russia, Turkish warplanes can't enter Syrian airspace.

While it is "normal" for Ankara to expect the U.S.-led coalition against ISIL to conduct airstrikes on the jihadist group's targets close to Kilis, the sources said, Turkey does not make this request "every time."

"It is obvious that ISIL is a threat and coalition should evaluate accordingly," sources added.

Coalition warplanes did not strike ISIL positions that lie across from Kilis, but conduct airstrikes against the group in Raqqa and Tel Battal on April 19, according to reports.