Syrian rebels hit a T-90A tank of the country's government forces south of Aleppo with a TOW-2A anti-tank missile, according to a video footage posted May 10 on YouTube, Lenta.ru reported. 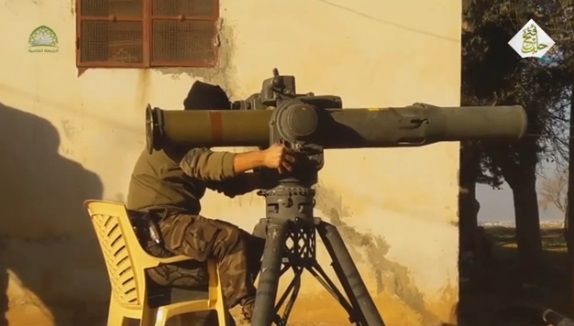 A U.S.-made TOW anti-tank missile system was used in the attack. No information on the nature of damage to the MBT or the fate of its crew is available.

This is the second recorded missile hit of the T-90 in Syria. In late February, in the province of Aleppo, the rebels videotaped the launch of a U.S.-made antitank missile on this MBT.

The fact that the 1.5-minute long footage captured  not a T-72 tank, more common in Syria, but its advanced version, T90, is proven by the presence of a Shtora-1 active protection system and a remote-controlled machine gun on the turret.

At the time of a TOW-2A missile launch, the tank crew was shooting a machine gun on the rebel positions.

The first appearance of T-90 tanks in Aleppo area was recorded in late November 2015. In December, it was reported that Syria used an early version of these MBTs, also known as a T-90 sample of 1992 (with a cast turret).

In early February, it was reported that the Syrian army forces used in Aleppo hostilities nearly 15 T-90 MBTs, obtained as a military aid from Russia. According to some sources, it was Assad’s elite units who were armed with the new tanks. The tanks crews consist of Syrian Army troops who have operating experience of T-72 tanks and underwent accelerated training courses.