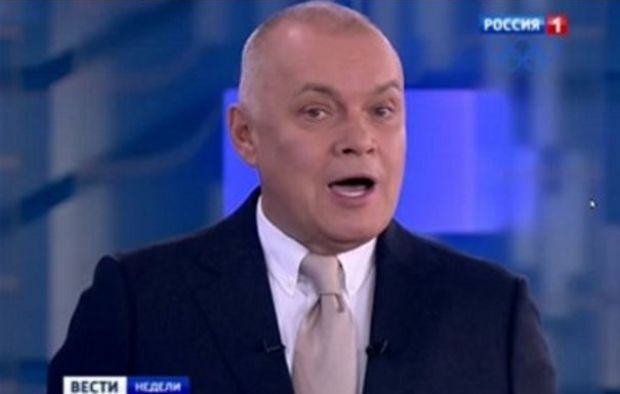 In a program aired on Sunday, May 22, a French TV host elaborates on the ways the Russian journalists resort to manipulations misrepresenting what the French citizens said in the interviews, shifting the story line and pushing for certain accents between the lines.

Thus, one of the talking heads of the Russian state propaganda on TV Dmitry Kiselyov announced a feature on Euroskeptics in France, the criticism of the European policy by the French.

But then the program shows footage of mass protests against labor reforms in France which ended in mass riots and a fight with the police.

Read alsoArrests, police injuries in France labor law protests - BBCKiselyov goes on to talk about migrants and how the French are afraid of them and do not want to let them cross into their country. And then, at the focus, are the statements of some French politicians on the need of cooperation between France and Russia. The host of Le Petit Journal points out that the very subject of the story, Euroskeptiks in France, was never raised throughout the news piece.

Le Petit Journal Reporters went as far as finding the people interviewed by the Russian journalists and asked whether they had actually said the things as presented in the Russian TV show. It turned out that either their words were poorly translated, or some of the quotes were fake.

Read alsoUkraine Rep. to UN accuses Russia of terrorism, promotion of "Russian world"At the same time, the French journalists have not received a response to their request for an explanation from Russia 24.